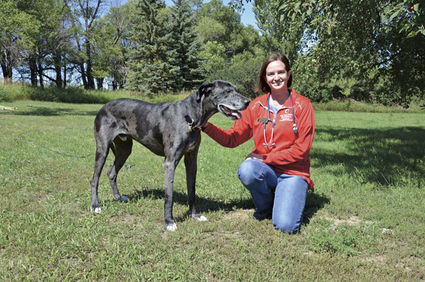 The Watford City Veterinary Clinic welcomed Dr. Megan Viniard as their third veterinarian July 1, 2014. After graduating from Ohio State Veterinarian School earlier this year, she, her husband Jeff, and their Great Dane Zebulon were looking for a new and exciting opportunity.

"My husband and I wanted to take an adventure and wanted to start a new chapter of our lives by moving west," Viniard explains. "I always knew that I wanted to be a vet in a rural area, I just didn't know where."

According to Viniard, Watford City has been great, offering plenty of friendly and welcoming people with the small town feel that she appreciates. She enjoys being an active part of the community recognizing that the local vets are an important part of the town.

She always knew that she wanted to work with animals and FFA and 4H only fueled her interest, but she really became involved with livestock through 4H projects. Viniard liked the idea of being a part of agriculture by ensuring an animal's welfare and being involved in the production of safe food. Having a general practice allows her to operate as the first line of defense for her patients.

The Watford City Veterinary Clinic, originally founded in 1967 by Dr. Robert Nelson, has always had a strong cattle practice but recently has seen its small animal practice growing. Viniard is dedicated to not only an animal's physical well-being, but is very intrigued by animal behavior and the bond between people and their pets. Being involved with a therapeutic riding center as an undergraduate, she recognizes the importance of pets and the improved quality of life they can bring. Helping families have good pet interaction is an important part of her work. 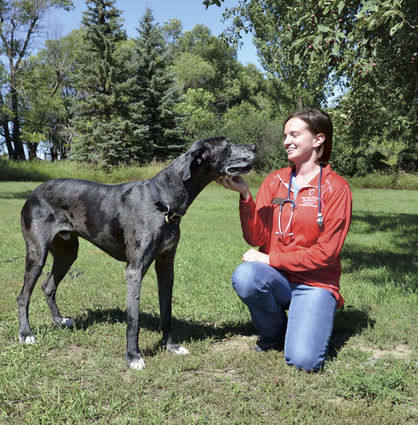 Not only does Viniard get to experience the excitement that the oil boom has brought to the area, but she also gets to witness the expansion of the clinic itself. A new building is in the works south of town and will provide a much larger facility. Though she believes the clinic would have grown regardless, she has no doubts that the influx of people has expedited the expansion.

Viniard's ability to treat both large and small animals makes her a great addition to the Watford City Veterinarian Clinic. They are located at 104 17th Ave NE, Watford City, ND 58854 and are open Monday- Friday from 8am-5pm and Saturdays 9am-12pm with an on-call vet 24/7. They can be reached at 701-842-4VET (4838) or online at http://www.vetexperts.com.