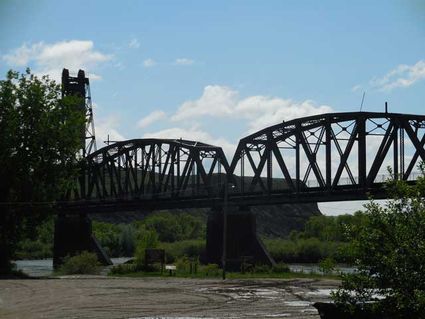 The Fairview lift bridge is a well-preserved piece of the past.

Sundheim Park is always one of my top recommendations to people looking to spend some time outdoors. Having grown up in the area, the Fairview Bridge was enchanting to me in my teenage years because of its enormity and preserved state. Back in those days, you had to go tie hopping and I distinctly remember the rush as I crossed the entire 1,320' expanse; 100' above the water, my heart would start pounding being so high up, but I would make myself stop and look around at how small everything seemed in comparison to this inanimate giant, connecting one bank to another over the Yellowstone River.

Later, I would do my research and learn about the history of the bridge and tunnel it connects to. The Cartwright Tunnel is the only tunnel in North Dakota, and stretches 1,456 feet; mostly hand-dug, it was constructed in 1912 and 1913. The Fairview Bridge is a unique vertical-lift bridge that allowed for the passage of ferries and barges on the river. Designed to use a counterweight system to raise each 'lift' section weighing over 1 million lbs., it was so carefully balanced it could be powered with only a three-cylinder kerosene engine. The lift bridge was a happy compromise between the two best forms of shipping and transportation, made to accommodate river ferries, while still meeting the needs of the railroad.

However, by the completion of the bridge in 1914, the use of riverboats had ended, and the lift was only used once shortly thereafter to demonstrate that it functioned. Construction of the Fairview Bridge began in 1913 as part of the Great Northern Railroad's plan to create a second mainline known as the Eastern Montana Railway, which was never completed.

For all of its grandeur, massive lifting machinery, and the latest-greatest technology of another time, the bridge has been underwhelmed in its usage. Passenger trains stopped using the bridge in the late 1950s and freight trains stopped running in the mid 1980s. It was also used as an automobile bridge until 1955 when a highway bridge was built nearby on ND Highway 200.

But, what these landmarks lacked in intended use, perhaps is made up for in unintended use. The Fairview Bridge is now part of Sundheim Park, and the Fairview Chamber of Commerce made both the bridge and Cartwright tunnel into a walking trail. There is a boat ramp, picnic tables, and fishing access. It also has a Disc Golf Course, installed in 2001; there are nine DisCatchers, used as double tees to create an 18 'hole' course. 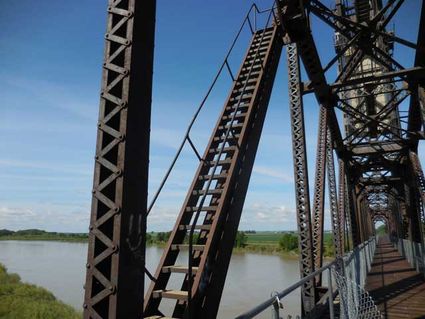 Visitors can still view the stairs leading up to the lifting equipment as well as overhead pathways, though the unused paths are missing a few planks.

Fifteen years ago or so, you had to earn your right to cross the river by scrambling up the nearly vertical embankment to the railroad ties; today, it's far more friendly as a walking path, with a gently sloping road up to the bridge, handrails, and accessible parking. Times do change, but you'll hear no complaints from me. I never would've attempted a trip with my three kids otherwise. The view is still amazing and when I stop to think about the construction, I can hardly fathom; people working with a common goal never cease to do incredible things.

Sunrise and sunset are the best times to take in the sights, and if you go around sunset, you may even get to hear the owls that nest nearby. If you visit during the heat of the day, you'll find relief once you're in the tunnel. Pay attention, you will know you're in the center when you can't see either end, but this can be easily overlooked.

Sundheim Park is located on ND Highway 200, 4 miles east of Fairview. Stop by to appreciate this immense artifact of American history, play a round of disc golf, or have a picnic. Just don't say that there's nothing to do.