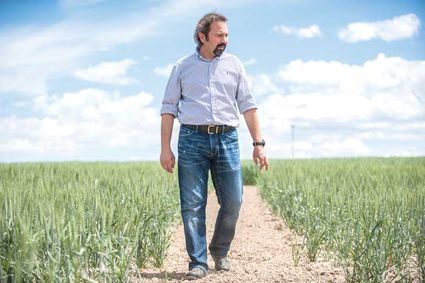 Hikmet Budak, Montana State University's Winifred Asbjornson Plant Sciences Chair, is among a global team of scientists that has successfully mapped and sequenced the genome of wild emmer wheat. This is the first time this has been accomplished. (MSU Photo by Adrian Sanchez-Gonzalez.)

A global team of researchers including Hikmet Budak, Montana State University's Winifred Asbjornson Plant Sciences Chair, in the Department of Plant Sciences and Plant Pathology, has decoded for the first time the complete genome sequence of wild emmer wheat. Wild emmer wheat is the original form of nearly all the domesticated wheat in the world, including durum (pasta) and bread wheat.

The 48-member team announced July 7 in the journal Science that it successfully sequenced and mapped the genome – or complete genetic code – of wild emmer. Wild emmer, one of the world's oldest varieties of wheat, is too low-yielding to be of use to farmers today, but it contains many attractive characteristics that are being used by plant breeders to improve modern-day wheat plants, according to the researchers.

Budak praised the achievement as "an invaluable contribution to the entire global wheat community," and said the research will have major implications for future food production and security as wheat breeding technology looks to advances in the nutritional quality of grain, disease tolerance and water conservation.

Budak said the new research provides a genetic map to the main traits that were selected by early humans during wheat domestication and serves as a foundation for developing modern wheat cultivars, plant varieties that have been produced by selective breeding techniques.

"The scientific community now has the tools to make and apply discoveries more efficiently than ever before," he said. "This discovery provides pathways to improve the yield and quality of wheat not only for Montana, but for global populations who consume wheat, as well."

"The research produced by Dr. Hikmet and his international colleagues ultimately benefits the ability of Montana grain growers to remain profitable and competitive on an international scale," Raska said. "What's remarkable about this particular genome map, is that it looks to the past to secure the future of food security, which is the kind of research that anchors the most important industry in the world --production agriculture."

Raska added that Montana grain growers are constantly having to keep pace with current research so that they can adapt their on-farm practices to meet global market demands.

"Dr. Budak's research continues to impress, but more importantly, his research is at the forefront of global crop production at the genetic level, which has the capacity to support the development of wheat cultivars precisely suited for Montana conditions and our greatest environmental challenges in production," Raska said.

Assaf Distelfeld, research faculty in Tel Aviv University's School of Plant Sciences and Food Security and Institute for Cereal Crops Improvement, led the study in collaboration with several dozen scientists from institutions around the world and Israel-based company, NRGene, which developed the technology that accelerated the research.

"From a biological and historical viewpoint, we have created a 'time tunnel' we can use to examine wheat from before the origins of agriculture," Distelfeld said. "Our comparison to modern wheat has enabled us to identify the precise genes that allowed domestication – the transition from wheat grown in the wild to modern day varieties. While the seeds of wild wheat readily fall off the plant and scatter, a change in two genes meant that in domesticated wheat, the seeds remained attached to the stalk; it is this trait that enabled humans to harvest wheat."

Gil Ronen, NRGene's CEO, said the wheat genome is much more complex than most other crops and has a genome three times the size of a human genome.

"Still, the computational technology we developed has allowed us to quickly assemble the very large and complex genome found in wild emmer's 14 chromosomes to a standard never achieved before in genomic studies."

At MSU, Budak uses cutting-edge research to help the university develop wheat that will stand up to the four traditional stressors of Montana's most important crop – wheat stem sawfly, drought, heat and micronutrient deficiencies. Budak is the first plant sciences endowed chair in the College of Agriculture and works closely with national and international advisory councils on research priorities for Montana's cereal grain agricultural economy. In May, longtime university supporter Norm Asbjornson gave $2 million in support of the chair, formally naming the faculty position the Winifred Asbjornson Plant Sciences Chair in honor of Asbjornson's hometown of Winifred. Asbjornson's gift brought the university to within $200,000 of its $5 million goal for the endowment.

Last year, 5.28 million acres of wheat were planted in Montana, making it the third-highest state for planted wheat acres in the country, according to the USDA.

The Montana Agricultural Experiment Station and the MSU College of Agriculture's Department of Plant Sciences and Plant Pathology host a world-renowned plant breeding program that emphasizes both traditional and molecular approaches in plant breeding and genetics with high yields, pest resistance and high quality. More information about the breeding program is available at http://plantsciences.montana.edu/.