ONEOK has continued providing support for local health services by donating $50,000 for medical equipment to the new McKenzie County Healthcare Systems (MCHS) facility in Watford City. In 2016, Oneok contributed $1 million to help kick-start construction of the new hospital located at 709 4th Ave. NE. Oneok's initial gift was earmarked toward an emergency room that proved to be invaluable in the aftermath of the July 10 tornado that struck Prairie View RV Park.

On Oct. 17, Oneok officials gathered for a check presentation and tour at the new MCHS facility. Local and state representatives also attended. The tour included completed and fully operational areas as well as other wings that are still a work in progress.

"The contributions need to continue," stated Dan Kelly, McKenzie County Healthcare Systems CEO. The additional needs for the hospital have a price tag of over $5 million. 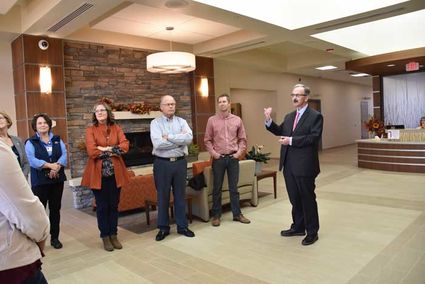 Also in attendance was Sandra Sanford, North Dakota Lieutenant Governor Brent Sanford's wife. Sanford read a statement from the Lt. Governor thanking Oneok for their contributions to local and state economies as well as philanthropic donations. She also shared her personal experience from her work in the healthcare arena and as a resident of the area. "This is a game changer," stated Sanford. When she first moved back to Watford City 15 years ago the healthcare facility was largely outdated and lagged behind facilities in larger communities. She also explained that as a parent, it's healthcare that makes you comfortable when deciding to settle in a new area.

The new building opened to the public on July 1, 2018. Since then MCHS has seen approximately 1,519 emergency room patients, with a total of over 3,000 patients. The radiology department sees over 200 visits per month. This state-of-the-art, $76.3 million facility features a brand-new hospital and clinic as well as updates to the connected Good Shepherd Home (long term care facility) and nearby Horizon Assisted Living.