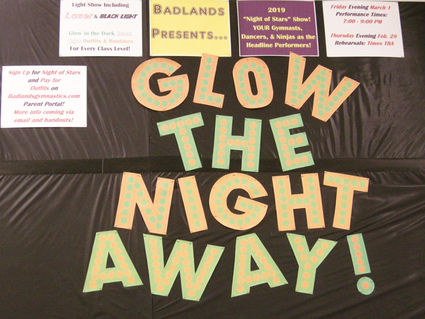 March 1, 2, and 3 Badlands Gymnastics Club will be wowing Watford City once again. This year, their Night of Stars show will be March 1. Then March 2 and 3 will be Watford City's first time hosting the Nodak Northern Lights Invitational gymnastics meet.

Badlands Gymnastics has been holding their Night of the Stars show once a year since the mid-1980s. According to coach Pat McWilliams, they have a different theme each year. In the past, they have had Olympic Gymnasts. He said, "One year we had people from America's Got Talent come over." This year their gymnasts will show off their talents and skills as they "Glow the Night Away". Three hundred Badlands gymnasts will participate from the ages of six months to eighteen years. Each class level will have a different color leotard that will glow under black and laser lights. The first group will perform a black light routine, the second will do a tumbling routine, and the third will be a routine on the gymnastics equipment. All of this will be done to music, black lights, and laser lights by Night Life Today Sight and Sound, a company out of Bismarck. Admission will be $5 with Shout Out Items on sale for all gymnasts and spectators. The program will be held in the Event Center of the Rough Rider Center at 6 p.m. and will end by 8:30 p.m. 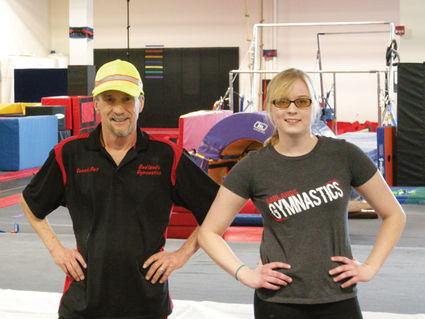 Saturday, March 2 and Sunday, March 3 will be the Nodak Northern Lights Invitational gymnastics meet. Two hundred and fifty athletes from eleven different gyms in North Dakota and Montana will be competing in three different levels of competition. The invitational will also be held in the Rough Rider Center's Event Center. Competition starts on Saturday at 8 a.m. and goes on until 8 p.m. The next day, Sunday, competition starts up again at 8 a.m. until 5 p.m. The competitive gymnastics season in North Dakota starts in November and ends with the North Dakota USA Gymnastics State Championships at the end of March. Badlands Gymnastics athletes are planning to attend eight different competitions this season and are excited to host their first home meet in Watford City.