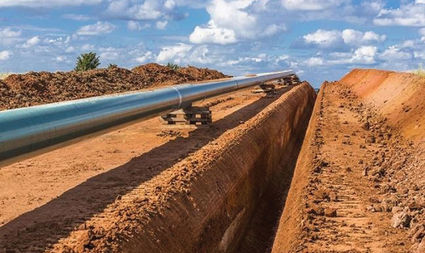 The planned Pipeline would be approximately a 12-inch steel pipe which could move up to 20 thousand barrels per day, and could transport ethane, propane, butane, isobutane mix, and gasoline (photo submitted).

The public meeting was held to receive input on a proposed 10.2 mile pipeline designed to transport natural gas liquids. The proposed pipeline would begin at the Targa Badlands Little Missouri Gas Processing Plant and would end at a facility planned by Oneok, called the Demicks Lake Pipeline.

The planned Pipeline would be approximately a 12-inch steel pipe which could move up to 20 thousand barrels per day, and could transport ethane, propane, butane, isobutane mix, and gasoline.

The purpose of the hearing was to provide an opportunity to comment by the public, as a part of the consideration of Public Service Commissioners in their role of providing oversight over such project locations.

According to Fahn, who serves as the Director of the Public Utilities Division for the Public Service Commission, the pipeline is an uncontroversial addition to pipeline infrastructure in McKenzie County. He explained the plans for the pipeline.

Fahn explained, "NGO means 'natural gas liquids.' The commission is required to hold a hearing in the county where the project is taking place."

The meeting, which lasted about two and a half hours, discussed the 'ins and outs' of the pipeline, but there was nothing unique or controversial about this pipeline project, according to the Fahn. Fahn also explained the location of the pipeline doesn't traverse any controversial property. 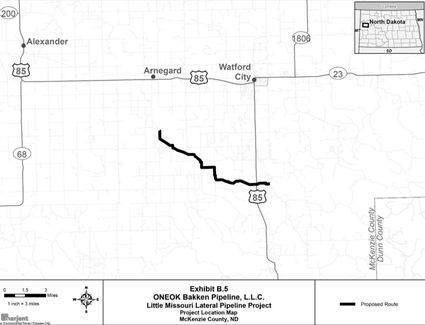 Fahn said, "The pipeline will not traverse any rivers or public occupied land. There are one or two residents, that used to be man-camps, that are near the pipeline, but probably shouldn't present any kind of problem." Fahn was clear to emphasize that the North Dakota Public Service Commission doesn't approve pipeline projects, but only approves the location for pipeline projects. Other agencies, like the McKenzie County commissioners, would have to give necessary permits if the pipelines cross public properties or roads. The pipeline does propose to cross beneath Highway 25 south of Watford City.

The North Dakota Public Service Commission does plan on releasing their decision to the public soon, according to Fahn.