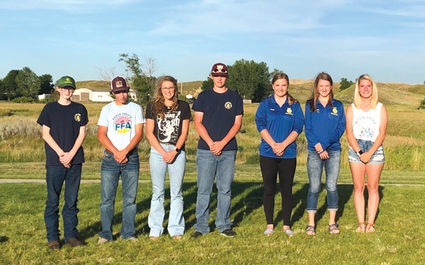 The Watford City FFA Chapter held an awards picnic at the Kent Pelton Nature Park on Tuesday, July 28 to recognize member achievements for the past school year. Members were presented with proficiency awards for their Supervised Agriculture Experience (SAE) projects and leadership awards. The Watford City FFA Chapter continues to develop its members through premier leadership, personal growth and career success.

The STAR Discovery Award went to Dominic-Jordan E. Robertson. As a young member, Dominic has helped whenever needed. He has attended every meeting possible and helped throughout FFA week activities. He definitely has demonstrated at a young age what it means to live to serve. Dominic was a member of our agronomy team and greatly improved throughout the season. He has a great future in store for him and our chapter looks forward to what's to come in future years.

The 2020 STAR Greenhand was Savanna Olson. Her accomplishments this past year include showing sheep at the State Fair, competing in Employment Skills at District Leadership, and competing in Ag Sales this winter. She was our second high salesperson for the fruit and meat fundraiser. Savanna has helped out at several FFA events and has a great start to her SAE project.

This year's Star in Agriscience is Jenna Mandler. Jenna has served as both Historian and Sentinel this past year. She competed in quiz team, judged Greenhand Parliamentary Procedure, attended National FFA Convention, was a top salesperson, and competed in the ag sales CDE. She was the Star Greenhand last year and has been a valuable member over the past few years. She's had numerous SAE projects that include poultry production and small animal care.

This year's Star In Ag Placement is Connor Cross. Connor has been very involved in FFA over the past four years. He has competed in agronomy, livestock evaluation, meats evaluation, environmental & natural resources, parliamentary procedure, Greenhand Quiz, and Creed. His SAE involves working at both Cross Brothers Cattle and McKenzie County NRCS. Connor has taken every agriculture class possible and has demonstrated a strong work ethic. He has stepped up in FFA over the past few years, especially in filling officer positions when needed, serving as student advisor, sentinel and vice president. He attended the National FFA Convention twice.

This year's Star in Agribusiness is Isabell Boekelman. Isabell has been a leader of our chapter in serving as a chapter officer for the past two years as she has been reporter and secretary. She has competed in floriculture, ag communications, and parliamentary procedure. She attended FFA leadership conferences, National FFA Convention, and has been a very active member all through her high school career. Her SAE this past year has been working at Cornerstone Bank for CWE.

This year's Star Farmer & recipient of the Casey Johnson scholarship is Kell Helmuth. His SAE involves poultry production, which he is very proud of. He has been very involved in FFA all through high school. He has volunteered to help whenever needed and competed in numerous CDEs. He was our president this year and was secretary the previous year. He has competed in agronomy, livestock evaluation, meats evaluation, environmental & natural resources, parliamentary procedure, Greenhand Quiz, and Creed. Kell has attended leadership conferences, district leadership and National FFA Convention twice throughout high school. It's going to be hard to imagine FFA at Watford City without Kell and these other seniors.

Receiving the Chapter FFA Degree were Alexis Davis, Shayla Rolla, Laney Hartel, Kristen Clark, and Alician Garcia. Receiving their State FFA Degree from our chapter were Kell Helmuth and Shayla Rolla. Cauy Hartel was recognized, as he will be receiving the American Degree during National Convention this year, which is the highest degree attained by FFA members.

Supervised Agriculture Experience (SAE) is an integral part of the agriculture education program. Receiving a proficiency award for her SAE projects this year was Shayla Rolla for beef cattle production. She was also named the district winner. 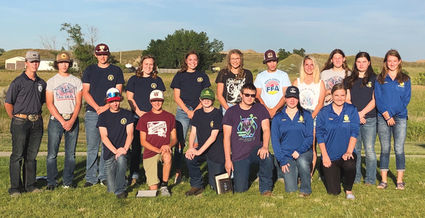 The FFA Chapter would like to thank the community for once again showing such support to our FFA program this year!