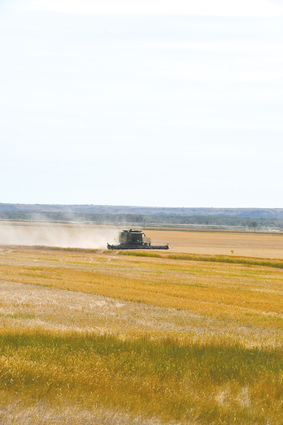 This year's harvest has been challenging for many farmers across the MonDak region. "It was a tough year from the outset - farmers were either struggling to get into the fields to get planted, or they got planted and things just dried out really quickly," stated Dr. Clair Keene, area extension specialist/cropping systems NDSU Williston Research Extension Center.

Keene explained that it has been an abnormal year for growers because of how the weather has been throughout the season. "At the beginning of the spring the ground was actually quite wet because we had seven-nine inches of rain in September, and then the ground froze so all that water was still there in the spring, so some folks were able to start planting very early around mid-April, but if it was a wetter field they might not have been able to get in mid-May. The tough thing was if you planted in mid-April, we didn't get rain until Memorial Day, so that crop went six weeks without rain and then waited another four weeks until we got more rain the last week of June," stated Keene.

Late summer weather has been really dry, which means that the crops are maturing earlier than average. Keene said, "Growers started to harvest early-planted peas and winter wheat around the beginning of August, which is pretty darn early. In the second week of August or last week of July, growers started harvesting very-early-planted spring wheat and durum. Lately, people have been ramping up harvest on spring wheat and durum, and I expect that to go full throttle through the end of August, which is also somewhat early."

Keene also explained that many farmers have had trouble deciding when to harvest their wheat and durum crops. "Right now the main tillers (stems that develop off of the main shoot of the plant) are dry and ready to harvest because those came through the drought and matured very early. However, if a field got rain from those thunderstorms we had in late July, that could cause the plants to put up new tillers, which can increase yields, but it is bad because farmers now have these mature heads that are ready to harvest and those green heads that are not going to be ready for another two or three weeks. So the farmer has a tough decision to make. If they try to harvest when the young tillers aren't ripe, they will have all this green stuff that is pretty wet, and then they will have to dry that grain and hope it does not spoil the good quality/mature grain. So some growers are just choosing to wait to let those green heads dry down. It is really a tough decision- it is the downside of when rain comes too late," stated Keene.

Due to the dry conditions and hot temperatures, the potential for combine and field fires dramatically increases. Keene added, "I am very concerned about combine fires. I strongly encourage farmers to have a fire extinguisher in the cab of the combine and an extra one in their truck. If harvesting a really dry crop, I recommend having a water truck or tank handy somewhere because it won't take much to start a fire in a field with how the weather conditions have been lately."