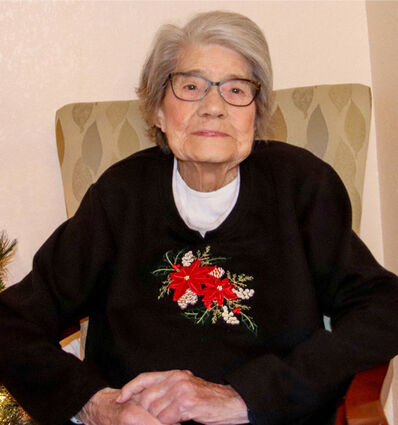 Amy L Gurney was born on June 7, 1927 to Alice and Andrew Jackson in Sidney, Montana. Amy was the 2nd born of 14 children. She spent her early years helping with her siblings and working on the farm. Amy graduated from Sidney High School. On July 1, 1945 she married Frank Gurney. After getting married they moved to Chicago where Frank attended electrical school. They returned to Sidney after he received his electrical certificate and he worked for Carl Benson as an electrician and Amy spent her time as a housewife. They were blessed with three children, Helen, Frank, and Ron.

Amy was a hard worker. She was the happiest when she was working with her flowers or in the garden. She always enjoyed visits from her family and friends. They were not allowed to leave without having coffee or Pepsi and a treat. Those treats included her apple pies and baked goods.

She was a member of a knitting group who met every Thursday for many years where she made several lifelong friends. Amy made several knitted or crocheted items for her family through the years.

Amy enjoyed fishing and the lake at their cabin on Fort Peck Lake. She enjoyed watching the kids swim, waterski, and spending time on the sandy beaches with them. Lots of good family memories were made.

Amy went home to be with the lord on Monday, December 21, 2020 at Sidney Health Center.