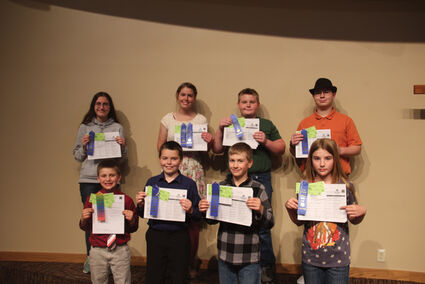 The annual Speech and Demonstration Day event was held April 6, at Pella Lutheran Church, Sidney, MT. Speech and Demonstration Day is a local 4-H event, where 4-H members get to practice public speaking skills that build self-confidence and self-esteem. A demonstration gives the 4-H member the ability to teach others how to do something that they have learned, they present the step by step process to the audience and judges. Members are evaluated on understanding of subject matter, their public speaking skills and how they answer questions from the judges. In the prepared public speaking category youth communicate an idea, thought or point of view without using any visual aids. Members are evaluated on knowledge of subject matter, speaking skills and maintaining audience interest. This year 14 4-H youth participated in the communication events.

The Cloverbuds that participated were: Kinlee Peters, Beau Becker and Vaughn Verhasselt.

The Crown Division is comprised of junior members who have, in years previous, already won their respective division. This year we only had one member in the Crown Division; Felixe Becker gave a demonstration titled Incubating Eggs. He was named the top Crown demonstrator.

One junior member competed in the prepared speech category. Ezra Hier gave a speech called What You to Do When You Get Your Fish. He was named top junior speech.

In the senior divisions there were two prepared speeches and three demonstrations. Amariah Hier gave a speech titled Who Was the Beautiful Jimkey? and Garrett Larson gave a speech on the Price of a Horse. For senior demonstrations Job Hier gave one called Magical Misdirection, Grady Larson gave one on Marketing Cattle and Amariah Hier gave one called What's the Song. All seniors received blue ribbons.

All top juniors will be honored at this year's Achievement Day that will be held in the fall. All seniors who meet all other requirements are eligible to attend Montana 4-H Congress in the summer to compete for the state title. Richland County 4-H would like to thank all the judges, volunteers and Pella Lutheran Church staff for making this a successful event.