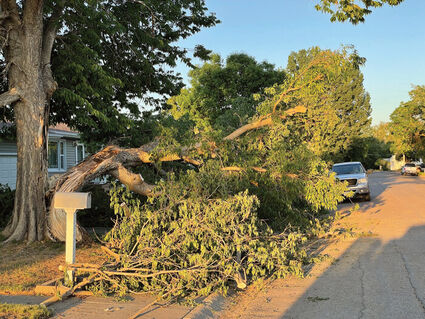 One of the numerous downed trees in the area.

After a storm hit the area on Thursday, June 10, Sidney and the surrounding towns were left without power and quite a bit of damage. With hail, rain, high winds and even some tornadoes, left with downed power lines, fallen trees and debris everywhere.

Brandon Roth with Sidney Disaster and Emergency services said he spent most of the day on Friday doing damage assessment. "In general, it's not too bad," Roth said.

There were about 120 poles knocked down in the storm. Roth said that some of the bigger poles west of town were built to withstand winds of up to 100 mph and were broken in the storm. Crews with MDU and LYREC worked throughout the night to fix poles and down power lines.

While most of Sidney had power back on Friday, Roth said there were areas further out of town, out in the country that could take another two days to get their power back.

Mark Hansen, MDU said that the Sidney area faced extensive outages. With the amount of rain we had, they had to bring in caterpillars because it was too wet and muddy for trucks to get to some of the areas that were in need of being fixed.

There were poles that needed to be replaced and some of them also required line work.

"It was some pretty extreme conditions they worked through," Hansen said of the overnight crews.

Williston was hit with heavy rain as well as hail. The Williston Police Department asked people to stay off flooded roads. They were also instructed to stay inside for safety.

They also had winds hit the area with such high speeds; cars were being blown off the road. Roofs were damaged and there were also some sheds that were blown over. 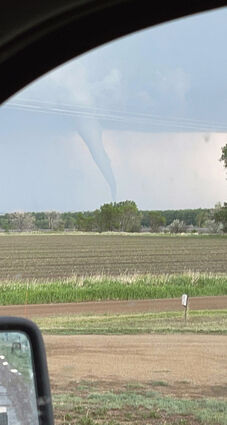 "A lot of maintenance issues came up, but we were on the low end with damage," Hanson said. Hanson said they had crews working all through the night to fix outages and downed power lines. He noted that they install protection devices on their equipment for situations like this. Sometimes the outage can be caused just by a breaker and fuse blowing or tripping, but it can also be caused by lightning.

Watford City was hit with a few tornadoes, but luckily didn't face much damage from the storms. Hanson said that localized outages were the main problems they faced. "They were impacted on the western territory more than the east side was," Hanson said.