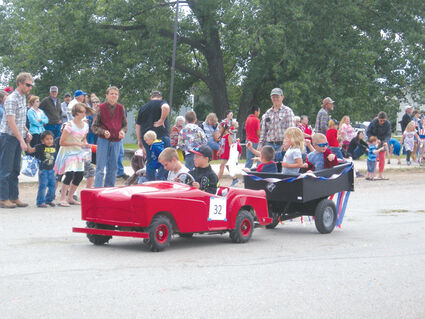 During the 2019 Lambert 4th of July Parade Brothers Gordan and Grant Knapp in a car passed down to and fixed up by their father, hauling a trailer full of family friends.

The MonDak area has several Independence Day events planned throughout the 4th of July weekend.

Arnegard will be hosting several events Sunday, July 4. Starting at 8:30 a.m. there will be a 5K run/walk starting on 4th Ave right in front of the fire department (check-in starts at 8 a.m. and there will be a fee of $10 per runner), a parade will begin at 11 a.m. (parade registration starts at 9 a.m.), followed by lunch at noon, and afternoon games will begin at 2 p.m. There will be cornhole tournaments taking place throughout the day starting at 3 p.m. and bounce castles, sponge toss, tractor pull, and a dunk tank. There will also be several vendors, a street dance at 6 p.m. (music from the Terry Waugh Band), and a fireworks show at the ball park on N. Main St.

Medora will be having its annual 4th of July parade - beginning at 3:30 p.m. MDT and commencing on the east end of town and finishing back in that same spot. Medora will have a professionally produced fireworks show that will light up the Badlands at 10:30 p.m. MDT. The fireworks will go off from the west side of the Little Missouri River, near the Medora Campground - the best viewing area will be at Medora's Chimney Park.

Williston will be hosting a family-fun weekend July 3 and 4. This will take place at Harmon Park at 11 a.m. with Williston's best food vendors, face painting, water slides and bounce houses, games and raffles. There will also be an adult comedy show featuring Andrew Ouellette at 9:30 p.m. at the Raymond Center - tickets for the show will be $45 at the door- this will be followed by a free fireworks show. There will also be races on July 3 at the Williston Basin Speedway, TNT Fireworks Presents-Rock the Race - gates open at 5 p.m. and the races will begin at 7 p.m.

Sidney will host a classic car show, BBQ, and live music at 2650 S. Central Ave on July 3 from 2-6 p.m. This will be held in conjunction with a Dragging Main Event. More info on this can be found on the Sidney Montana Dragging Main Facebook page. 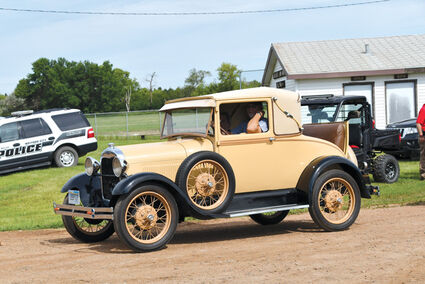 Darrell Hysted and his mother Phylis throw candy from a 1928 Model-A sport coupe in the 2019 Arnegard 4th of July parade.

Lambert will be celebrating Independence Day July 3 and 4. July 3, there will be school activities all day. From 9 p.m. to midnight; dance to "The Relics" on Main Street. On July 4, there will be a coffee and breakfast social at Lambert School cafeteria from 7-10 a.m .; non-denominational church service. There will be a little tykes' bike parade and then the main parade on Main Street at 11 a.m. followed by a Main Street BBQ, car show, ping pong ball drop, water park, talent show at the old gym, and bingo. At 5 p.m. There will be a Smokin' & Jokin' BBQ supper at Town and Country Repair, followed by softball games, kickball, music on Main Street by recording artist Josh Kehr at 7 p.m., and a fireworks show at 10 p.m.

Culbertson will have a 4th of July Freedom Run, starting at 7 a.m. at the Culbertson City Park - there will be options of participating in the 5k or 10k distance.