Hellands Receive Above And Beyond Award For Fairview 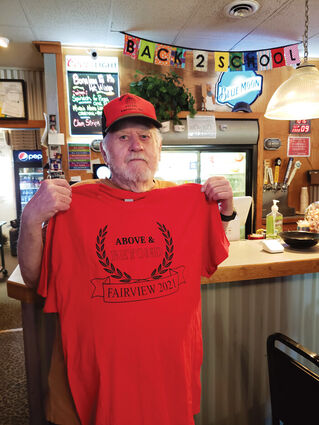 Powder Keg owner Harold Helland with his "Above & Beyond" t-shirt.

The Fairview Chamber of Commerce presented it's first "Above And Beyond For Fairview" award to Harold and Clay Helland, owners of Powder Keg, for their contributions to the community for almost 50 years. But Hellands credit the community of Fairview for their success. "Fairview has been wonderful to me and Dad, and when somebody needs help, you help. It's not above and beyond, it's just what you do," Clay stated.

From the very beginning, the community built the Powder Keg and kept it growing and evolving. Harold needed something to do after retiring as principal from Fairview School in 1971 so he and his wife Charlene decided to open a pizza place. Financing was hard to come by but assistance from the Community Development Corporation got the foundation built. Friends and family loaned money, not necessarily expecting to be paid back but all those loans were paid within 10 years. Tanglen Brothers, Savage, provided the building materials with no advance payment and family and friends built the building. Harold's brother, Lawrence, a carpenter, was in charge with brother, Wayne, working alongside. Many individuals from the community worked long hours to get the building ready, all the kitchen equipment came through MDU and M&C Beverage, Miles City, helped with the bar.

Harold said he and Charlene opened the Powder Keg in May 1972 not really knowing what they were doing. A 9" pizza was only $1.25 and opening night was pretty chaotic with friends helping out whenever needed.

Hellands had done their research at various pizza places but have always relied on their customers to tell them what they wanted. "The community helped us and told us what they liked, or not," Clay said. The results? Amazing pizza, plus great appetizers, burgers, pasta and more draw customers from all over the area.

Powder Keg special was the brain child of Carol Watts, the basic Brazilian came from an exchange student, and other pizzas are named for creative workers who came up with delightful combinations. Clay also credits people like Judy Anderson and Jim Strasheim, Hotel Albert, for being an inspiration and pushing him to try new things.

Powder Keg was definitely a family affair in the beginning with Clay and his younger sister, Susan, working part-time throughout their school years. Clay came back during summer vacation from college and continued to work part time while he pursued other interests. He came back full time and purchased the restaurant in 1992. About 20 years ago, the restaurant underwent a major remodel with the expertise of Jerry Cornelia. Another remodel is in the works. The restaurant now employs about 15 people and has always provided opportunities for high school kids wanting to work. Harold still owns the building and says that he and Clay talk every night. "Clay is my hero," Harold proudly said. "He has done a really good job."

"When the business opened, we just wanted to give back to the community," Harold explained. And giving back is what they do, much of it quietly, not expecting any recognition. The Fairview schools have been the recipients of much of their generosity. "Whatever they need, we're happy to do," Clay said. He also comes up with creative ideas for helping others like the time his sister Susan needed lunches for her students on a field trip. Clay was happy to provide the lunches but broadened the gift. In exchange for a free lunch, the kids donated food to their local food bank in Terry. It was a win-win situation for everyone! Donations to benefits and personally to families who are undergoing health or other issues are common.

Powder Keg has always been a Chamber member with Harold being an active participant in meetings and projects. During the renovation of the Fairview Bridge, he spent countless hours helping out and made numerous trips to gather materials when the National Guard was doing extensive repairs on the tunnel. "It was a worthy project for Fairview, people come from all over the world to see it," he commented.

Clay Helland, owner of Powder Keg, was the recipient of the Above and Beyond Award for Fairview, along with his Dad, Harold.

Other big projects include the sugar beet Capitol sculptures and the highway sign at the junction of Hwys, 16 and 201. He was also a willing worker on highway cleanups, tournaments and any other projects the Chamber took on. At 91 years old, Harold no longer attends meetings but is still vitally interested in the well being of the town that has given him so much. Powder Keg continues to actively support events in the community, always believing in giving back.

Congratulations Harold and Clay on winning this award. It is so well deserved!

Nominate someone you believe goes "Above and Beyond for Fairview," by submitting their name and a brief explanation to Fairview Chamber of Commerce, Box 374, Fairview, MT 59221. Awards are presented quarterly.