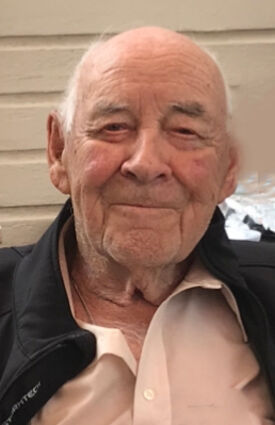 Celebration of Life for Dale Erickson, 91, of Sidney is at 6:00 P.M., Thursday, October 14, 2021, at the Sidney Elks Lodge, Sidney, MT under the care of the Fulkerson-Stevenson Funeral Home of Sidney. Visitation will be on Wednesday, October 13, 2021 from 10 AM to 5 PM at the funeral home and an hour before services at the Elks Lodge. In lieu of flowers memorial may be made to: the animal charity of your choice. Remembrances, condolences and pictures may be shared with the family at http://www.fulkersons.com.

Dale Bruce Erickson left us on Saturday morning, October 9, 2021 to be greeted by family and friends eagerly awaiting his arrival on the other side. We shall miss him.

Dale Bruce Erickson was born on a farm near Mohall, North Dakota on November 23, 1929, to Luverna (Porter) and Louis Richard Erickson. His sister Hazel, who was 6 at the time, was sure the doctor brought him in that black bag he carried.

He grew up on the farm, attending school in Mohall through the 8th grade. He opted out of high school to "get on with his life". He worked for various farmers in the area, eventually getting a job working for a water weller. It was then that he discovered his love for drilling.

On December 10, 1951, Dale entered the United States ARMY. He served as Lead Gunner on the 98th Parallel (front line) on a 155mm Howitzer. He said the barrel of the gun was 22 feet long and could shoot up to 20 miles. It was one of only 11 in existence at that time. He fought in Korea until cease fire was called on July 27, 1953. He was honorably discharged on December 24, 1953. He earned several medals, and was even sent a medal from the President of South Korea, thanking him for doing his part to liberate and save the country of South Korea from communism. Dale had night mares about Korea until the very end.

Upon returning from Korea, he worked seismograph then went to Seattle to work for Boeing Air as a fork lift and crane operator. City life was just not "his can of beer". He jumped at the chance to come back to the oil field and never regretted his decision.

On Memorial Day of 1959, he met Susan Jane (Susie) Ferch in Circle, Montana. They were married on July 6th, 1959 in Greybull, Wyoming. They tolerated each other for the next 62 plus years. Maybe less, as Dale worked away from home.....a LOT!

Their first 7 years were spent traveling with an oil company. In 1962, they welcomed daughter Darla Dale, born in Sidney, MT and in 1963 son, Guy, (Darol Bruce) was born in New Castle, Wyoming. In 1966 the family increased by three when Susie's parents died and Dale and Susie were happily granted guardianship of her younger siblings Lawrie Jo Fritz, Ronald Lee Fritz and Robin Ray Fritz. They fit into the family like they had always been there. Later two more babies completed the family, Danny James in 1967 and Kristal Dawn in 1971.

In 1968 the family all moved to Sidney and it has been home ever since. Dale and Susie started their own drilling company in the early 70s. During his life he had many BEST friends, too many to mention by name. But Melvin Stamp and Dennis Swenson were the closest and longest lasting. They were closer than most brothers.

Through the years, Dale was plagued by many health problems. He had many heart stents, by pass and aortic valve replacement. He had prostate cancer, skin cancer, hernias and very bad bunions, terrible arthritis and a heart pace maker. Dale was like that "un-named watch", he took a lickin' and kept on tickin'. Near the end, he developed a form of dementia, but even though he had a hard time with names, he could remember every hole he had ever drilled and where each and every one of them was.

Dale had a deep compassion for the less fortunate. So, in lieu of flowers, it is suggested that donations be made to your favorite animal rescue, Feed the Children or any charity of your choice, in his memory.

A very special thank you to Dr. Kessler, Marcy, and Jacquie -- You know he loved ya! Thanks, as well to the entire staff at Sidney Health Center, Sidney Cancer Care Center, and staff at The Clinic Pharmacy and Reynold's Market -- You all held a special place in his heart and we appreciate you all.