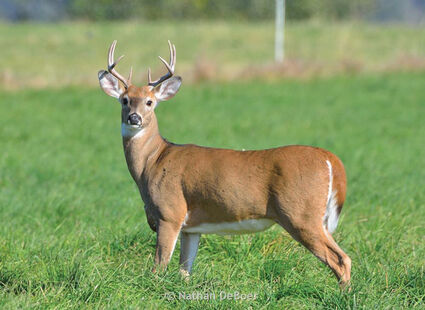 Glasgow - Over the last several weeks, Montana Fish, Wildlife & Parks has received reports of dead or dying white-tailed deer in the major river drainages in eastern Montana. Early indications showed patterns and symptoms similar to epizootic hemorrhagic disease (EHD), and several dead deer had samples submitted for testing. Early results indicate that at least some of the sampled deer tested positive for EHD.

In northeast Montana, the furthest western extent of the disease appears to be along the Milk River near Saco, then east along the Milk and Missouri Rivers to North Dakota, with varying degrees of whitetail mortality in between.

In southeast Montana, the most severe areas have been reported on the Yellowstone River between Glendive and Sidney as well as many areas throughout Carter County.

Impacts to local populations can be highly variable, with some areas seeing high mortality rates and others seeing minimal impacts. Hunters should plan accordingly if they plan to hunt in one of the affected areas. Furthermore, surplus whitetail B-license (699-00) in Region 6 were decreased by 2,000 in response to the disease. FWP staff will continue to monitor the situation and keep the public updated on the extent of the outbreak.

How you can help!

FWP would like to get an idea of the distribution and severity of this disease. If you find dead or dying white-tailed deer, please contact your area biologist or FWP office. If possible, provide information on the species, number of individuals, behaviors and symptoms observed, and a general location.

EHD is an infectious, sometimes fatal virus that is usually spread by a virus-carrying gnat or midge. Many animals affected with EHD lose their appetite, often are drawn to water, lose their fear of people, grow weak, and typically die. This disease is often confused with "blue tongue," which is a separate, but similar, disease. EHD is not transmissible to humans.

EHD is not uncommon in central and eastern Montana in late summer or early fall. The disease mostly impacts white-tailed deer, but also shows up occasionally in mule deer and antelope. EHD outbreaks typically occur in river bottoms and large creek bottoms, likely due to higher concentrations of white-tailed deer and the insects that transmit EHD. These outbreaks often end when a hard frost kills the insect vectors that carry the disease.

With cooler temperatures forecasted across the state, biologists are hoping the weather will slow down the insect vectors. However, there may be more transmission of the disease until a hard frost eliminates the adult insects, and FWP will not know the full extent of the outbreak until then.

Can hunters harvest deer with EHD?

Hunters usually do not harvest animals infected with EHD because animals typically die within 8 to 36 hours from the onset of disease. In most years, the majority of deer are harvested during the Montana general (rifle) hunting season, which is long after a killing frost marks the end of EHD for the year.

If a hunter does harvest an animal that is symptomatic with EHD, it may not be fit for consumption due to the hemorrhages within in the body. Contact your local FWP office if concerned about the consumption of a harvested animal.

More information on EHD can be found on the FWP website: https://fwp.mt.gov/conservation/diseases/ehd-blue-tongue.