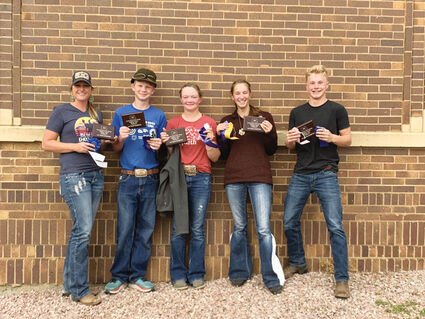 The team will represent North Dakota at National Invitational 4-H Range Judging Contest in Oklahoma in the spring of 2022.

Cyrena Kuss, Woodworth; received the Head of the Herd award as the top-scoring individual in the 4-H junior division.

The range-judging contest consists of three ecological sites and two range plant identification sites. Participants evaluate the soil type, slope and plant content of each site, along with the current condition of the range and make recommendations on range management practices.

Each plant identification site consists of 15 plants. The participants identify the plant and indicate various traits for each plant.

The range-judging contest also includes a team problem related to a range situation. Teams work together to calculate the appropriate stocking rate and management practices.

The 4-H and FFA range judging contest is conducted with support from the North Dakota 4-H Foundation, the Society of Range Management, the North Dakota Stockmen's Association and Bronson's Market, Bowman.

The event was held on land owned by Lee Hofland and Jeremy and Carrie Stadheim and was hosted by the Scranton FFA Chapter and the Reeder Community Center.