Groskinskys: A Lifetime Of Adventures 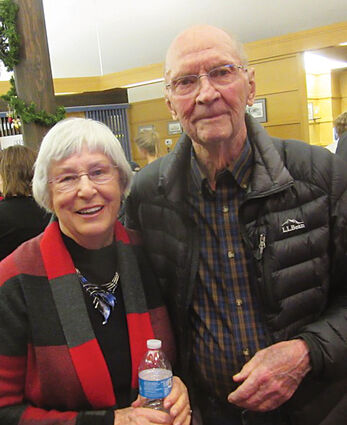 Bud and Anne Groskinsky's story is a love story, their love for each other, the land they've worked together, the many people who have touched their lives and the wonders of the planet.

Married for 66 years, the couple got acquainted at the log cabin church in Crane when Anne was still in high school and working a summer job at Pickering Honey Company. They were married one week after Anne graduated from high school and headed to Rocky Mountain College in Billings where they both got degrees, hers in medical technology, his in chemistry. They stayed in Billings for a while but soon returned to the family farm south of Sidney. Anne had been raised on a farm but had brothers who did the outside work so Bud taught her the art of farming. She learned to do everything, from irrigating, to driving a beet truck, to operating every piece of equipment including the combine. She also worked in the basement of the old hospital Wednesday mornings with the radiologist who flew in from Billings.

Groskinskys have worked tirelessly to improve what Bud calls the last and therefore poorest homestead in what was then Dawson County, plus other land as it became available, turning it all into a thriving farm and recreation area. Even though it's now rented to V5, Bud is still vitally interested. He said he tries not to interfere but continues to do things to improve the efficiency of irrigation with drainage work. "I'm still out there," he stated. He's also been busy clearing beaver dams from the drainage ditches. The day of this interview he planned to mow some weeds to prevent blockage to the miles of cross-country ski trails if it snowed. Those trails have been well used, with Anne skiing up until just two years ago, and many other people from the community coming out to enjoy a peaceful day in the woods.

Although Groskinskys have no children of their own, they have welcomed family and friends, relishing fun times skiing, hiking, boating and picking agates along with other activities. Theresa Livers was one dear friend who enjoyed many adventures with them. "Theresa rode on the 4 wheeler with Bud more than anyone," Anne said. "It's hard to lose so many good friends," Bud lamented. Now Theresa's grandsons come to play.

The couple worked hard three seasons of the year, and then traveled the world, mostly in the winter, to every continent, including Antarctica where they visited the research stations. Bud's face lit up as he said that Anne was a good partner for travelling and other reasons, lots of them. Anne talked about travelling and being together 24 hours a day for 21 days. "We enjoy the same things and got along all the time. We didn't argue about anything and really never have. We're like one unit I would say."

"It's been a pleasure to see all the different countries, especially New Guinea where they still wore grass skirts," Anne said. Bud added that they traveled for adventure, knowledge and pleasure. They have had a lifetime of adventures and Bud shared a few of the highlights.

With his memory still sharp at 89 years old, Bud recounted tales of travelling to exotic places and meeting fascinating people along the way. Travelling in long boats hewn out of trees, witnessing the painful initiation of young boys in New Guinea, having to hot wire a bus and ride in the baggage compartment of a plane in Mongolia, being taken off the bus at gun point in Uruguay for taking a forbidden picture, enjoying an incredible talent show in Beirut, losing one of their travelling companions heading into Syria because he had an Israeli stamp on his passport, riding elephants in Nepal, riding in the jump seat of the plane as it circled ever higher around Mount Everest, a momentous trip to China just as trade was being opened up and a two week horseback riding trip visiting First Nations villages in British Columbia were some of his favorites.

Many times, Groskinskys travelled as Canadians. They had no patience for complaining or bragging tourists. "We didn't complain," Bud stated. "We were there to observe and learn and only gave our opinion if it was asked for. The Canadians didn't complain about anything and we fit in with them." They also frequently travelled with a group of 10 or so couples, often with Lars Lindblad's tourist agency, which the group ended up owning for a short time when Lindblad needed financing to get his ship off a sandbar. They each put in $50,000. Lindblad got his ship going again, and all the investors got their money back, with interest.

Closer to home, Groskinskys roamed the rivers and badlands of eastern Montana and western North Dakota, alone or with friends, finding hidden treasures wherever they went. By getting acquainted with landowners, they were able to get permission to cross private land, opening up vast opportunities for adventures on public lands.

Groskinskys had a great system for getting the most out of their adventures and recording them. Bud took pictures while Anne took copious notes. They have boxes of slides and notes, which were put to good use by Anne when she did presentations at Sidney area schools. She would also take some of the souvenirs for the kids to see. "The kids were so well-behaved and would sit entranced by what they were seeing and hearing," Anne said. Recently Anne talked to an adult who had been privileged to attend a presentation as a student. "It was so nice to hear from a student that remembered it."

Groskinskys have solid Christian values and are ready for what comes next. Anne's health is failing and Bud has had pneumonia four times, with antibiotics doing their job. "Some day, they're not going to work," he stated. Asked what she would like her legacy to be, Anne gave it a lot of thought and then replied "that I've been a good partner to my husband." "She's the best," Bud said proudly. Bud would like their legacy to be what they've accomplished for the good of the community through their gifts and investments.

The community has certainly benefited from their generosity with major recipients being the Foundation for Community Care and the Boys & Girls Club of Richland County. Anne is delighted with the new facility and how they blended the Methodist Church in with the club.

Melissa Boyer, CFRE, director of the Foundation For Community Care, described Groskinskys' contributions this way. "Back in the 1980s, Bud was one of the very first members of the community to advocate for the necessity of a healthcare foundation. He knew there needed to be a non-profit partner for Sidney Health Center to provide for capital projects and equipment, and to be there to help the community. He and his wife Anne, and Stockman Bank donated the very building where the Foundation for Community Care currently resides. Though the couple has gifted a terrific amount of money to the Foundation, their friendship over the years has meant more to us than dollars and cents. Their wisdom and direction helped this organization grow in unimaginable ways. Their generosity in all things is awesome-to their friends, neighbors, land, and wildlife. I know if we all worked as hard as this pair, there would be nothing left to do in this world. Our community has benefited from the Groskinskys in a multitude of ways that the people of this area will never even know about, because they don't give for notoriety, but for the needs they see and the good they can do."

Elaine Stedman, CEO, Boys & Girls Club of the MonDak, appreciates all the Groskinskys have done for the Club. "Bud and Ann Groskinsky have been long-time gracious and generous supporters of Boys & Girls Club of Richland County. They were among the first people on board to express support for our capital campaign project and have continued to support the Club throughout the construction and development of our new facility. We are eternally grateful to their generosity and their commitment to the youth of Richland County. They are true blessings to our community. Their generosity will make a lasting impact on Sidney and Richland County."

Currently, Groskinskys are helping Wycliffe Bible translators with their mission to print the Bible in every language in the world. People are sent to the various countries to learn the language, then return to the original manuscripts of the Bible and interpret them into the needed language. Copies are then distributed in that area. "It's been very successful, I think," Bud said. Wycliffe believed it had reached its goal, but a couple of years ago, more languages were found so the new completion goal is 2023.

Bud has had time to contemplate life and death and believes that what's happening now is what is already predicted in the bible. "The lawlessness and everything, you can read it in the Bible," he said. He also has an idea of what the soul really is. "You get old and you think about things. They say the soul never dies but what does it look like? What if your mind is your soul? How many minds do we have on the planet? Lots. We make decisions with our minds. I think it's the same thing."

A potential Extended Care stay brought up the subject of vaccines. "I don't see why people aren't vaccinated against COVID," Anne said. "We've always had to be vaccinated to travel and never got sick." They even travelled to Fargo to get a yellow fever vaccination. "It's not political, it's to protect you," she emphasized.

Instead of Extended Care, which has had lockdowns due to staff with COVID, Groskinskys are staying in their own home with caregivers Teresa Pedersen and Lori Utter. Relaxing in the living room of the beautiful home they partially built themselves, watching beet harvest taking place on the land they love, Bud says "We're ready."