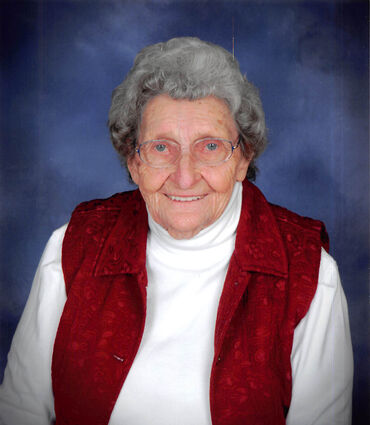 Funeral services for Norma A. Etzel, 93 of Savage, MT are at 10:00 A.M., Friday, November 5, 2021, at the First Lutheran Church, Savage, MT with Pastor Tim Tharp officiating. Interment will be in the Riverview Cemetery, Savage, MT, under the care of the Fulkerson-Stevenson Funeral Home of Sidney. Visitation will be Thursday, November 4, 2021, from 10 AM to 4 PM at the funeral home and one hour before services at the church. In lieu of flowers memorial may be made to the First Lutheran Church, Savage or a charity of one's choice. Remembrances, condolences and pictures may be shared with the family at http://www.fulkersons.com.

Norma Etzel left this world and entered into heaven on Monday, October 25, 2021.

Norma was born to Otto and Mary Lange on December 6, 1927 at the family homestead at Burns Creek, MT. Norma attended grade school at Breezy Flats and completed her schooling at Savage High School graduating in 1946 as Valedictorian. After high school, she taught at The Three Mile Country School in Dawson County on a teaching certificate for one year due to a teacher shortage. Norma then went out to Ellensburg, WA to work but was called home after a few months when her mother fell ill. Norma then moved to Glendive where she worked at Montgomery Wards and Shell Oil.

Norma married Robert (Bob) Etzel Sr. on December 26, 1955 and moved to the family farm at Savage, MT. To this union five children were born: Robert, Ronald, Dianne, Debra, and Karen.

Norma was the true farm spouse supporting Bob with the farming duties. She always had a large garden and enjoyed baking for the family. She was a hard worker and instilled those values into her children. She also graciously gave her time wherever needed including caring for her grandchildren when three arrived at once!

Norma enjoyed playing cards and spending many hours of putting picture puzzles together.