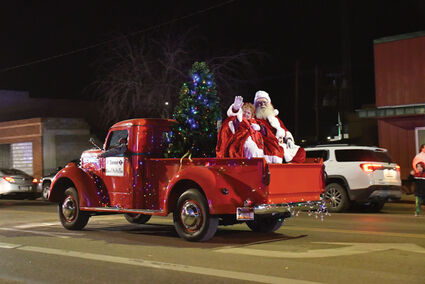 The Sidney Area Chamber of Commerce has several events scheduled this weekend.

"We traditionally kick off the holiday season the Friday after Thanksgiving. It's very much themed Christmas I'd say. We're grateful to Oneok for presenting the Christmas Stroll and Parade of Lights annually. We are adding a few new things to our traditional "Christmas Stroll," Sidney Area Chamber of Commerce & Agriculture, Kali Godfrey executive director said.

Friday, Nov. 26, 8-10 a.m., the movie, "The Grinch Who Stole Christmas" will play at the Sidney Elks Lodge. This is a family-friendly activity with Santa and treats. Attendees are encouraged to bring their favorite blanket and/or pillow to the movie.

From 11 a.m.- 1 p.m. at Sidney City Hall, Sidney Police Department will participate in a polar plunge to raise money for the Special Olympics of Montana. Each plunger has a fundraising goal of $150 (adults) and $50 (youth).

Godfrey said, "The Polar Plunge is quite literally, our own policemen 'plunging' into a dunk tank full of cold water and ice."

In addition to this, The Sidney Fire Department will be participating in a pie-throwing contest. Sidney Tendo will serve a lunch of pizza by-the-slice.

From 2-4:30 p.m. at Richland Ranger Hockey Arena, there will be free open skating and s'mores making.

4-6 p.m. downtown will be filled with music, entertainment, food, and vendors.

The Parade of Lights will start at 6:30 p.m., several floats representing businesses; clubs and churches light up Central Avenue with bright displays of holiday cheer.

"I'm so excited for the parade! Brings me back to childhood," Godfrey added.

This year the Chamber added the following float prizes: 1st Place: $500, 2nd Place: $300, 3rd Place: $200. Judging is based on the floats providing the most creative holiday cheer.

The Chamber will also have a Great Grinch Giveaway featuring a random giveaway during the parade of over $1,500 in gift cards in addition to coupons and other Christmas gifts. Immediately following the parade, Santa will be at Reese and Ray's IGA for cookies and hot chocolate.