Eagle Tournament To Bring Teams From Across The Country 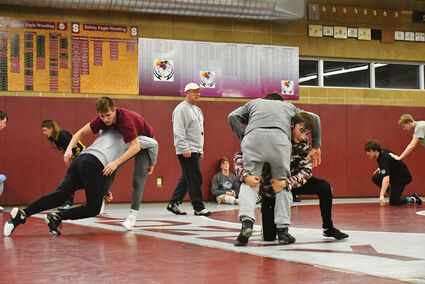 Sidney wrestling coach Guy Melby leads the team through take down drills during practice on Nov. 26.

This year seven teams from out of the area will be competing. Teams from Post Falls & Columbia, Idaho; Manhattan & Seymour, Illinois; Oak Harbor, Ohio and Rapid City, South Dakota will be in attendance as well as many other schools from Montana and North Dakota. Montana Class AA schools will not be competing because they started their season a week later than Class A, B & C.

Although several state champions graduated last year, coach Guy Melby is confident this year's team will perform well. "We have some good dudes coming back this year." Melby said. "We may not be as dominate this year but we should score 180 to 200 points at the state tournament."

Even though the team isn't as deep and talented as in recent years, there are ten promising freshmen coming in this year. Many of have competed in the off-season. "We are developing some guys coming up. I'm going to have to coach this year!" Melby joked.

The Eagle Tournament will begin with the dual tournament starting on Dec. 3 at 8:30 a.m. The top 16 teams will compete at Sidney High School with the remaining 16 teams competing at Central School. The dual team finals will be held at 2:45 p.m. at the high school.

The first round of the individual tournament will begin at 7:30 p.m. at the high school. The quarterfinals round will be at 9 a.m. on Dec. 4 followed by the semifinals at 11:30 a.m. Varsity placing rounds will begin at 5 p.m.