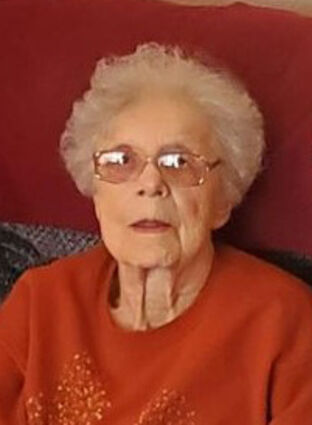 Funeral services for Velma Johnson, 96, are at 10:00 A.M., Saturday, December 18, 2021 at the Ebenezer Congregational Church, Sidney, MT with Pastor David Meehan officiating. Interment will be in the Sidney Cemetery, Sidney, MT under the care of Fulkerson-Stevenson Funeral Home in Sidney. Visitation will be Friday, December 17, 2021, from 10 AM to 6 PM, at the funeral home and one hour before services at the church. Remembrances, condolences and pictures may be shared with the family at http://www.fulkersons.com.

Florence “Velma” was born on November 7, 1925, Vida, MT to Pearle and Irene (Zumsteg) Cooper. She lived on her parents homestead till the age of 3. They then moved to Axtel, MT where she graduated from the 8th grade. The most important thing that happened was when she accepted Jesus Christ as her Lord and Savior at the age of 15. She graduated from Richey High School in 1946. In the fall of 1947, Velma moved to Sidney, MT where she worked at various places. In 1951, she enrolled in Prairie Bible Institute at Alberta, Canada. In 1952, Velma married Donald K. Johnson. They lived and took over his parent’s farm in Sidney, they had two children, Jacqueline Pamela arrived in 1960, followed by Philip Donald in 1963.

In 1987, Velma and DK moved into Sidney. She always raised a big garden, canning and freezing many things. She kept busy teaching Sunday school and helping with many things at the First Baptist Church. For many years she ran a Christian Gift Shop called Vee Jays. Her husband, DK passed away in 2017, and Velma continued to live in Sidney.

Velma passed away on Sunday, December 12, 2021, at the age of 96, at Sidney Health Center Extended Care in Sidney, MT.