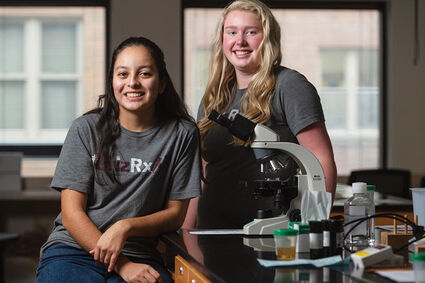 Missoula – University of Montana first-year student Tori Matteson can't point to a specific event that peaked her interest in becoming a pharmacist – there aren't any in her family – but her curiosity about medicine started early in her high school years growing up in Butte.

When it came time to enroll in college she looked at a few pharmacy schools in California and Idaho, but in the end it was "UM all the way," she said.

Besides the proximity to home, Matteson said an invitation to participate in the inaugural class of a new UM program designed to fast--track pharmacy students was too good to pass up.

The GrizRx Assurance Program offers a direct path to qualified freshmen interested in pursuing the UM Doctor of Pharmacy degree. Students accepted to the program are enrolled in a focused two-year pre-pharmacy curriculum, are provided concentrated mentorship by pharmacy faculty, opportunities to conduct research and have a reserved seat in their incoming first-year pharmacy class. Each student receives a $1,000 scholarship annually.

"Many times, we have found that students interested in becoming pharmacists don't take the correct course prerequisites for the UM Doctor of Pharmacy program or think they need to complete a degree before applying to the program," said Professor Marketa Marvanova, UM's Skaggs School of Pharmacy dean. "This costs them money and more importantly time. We designed this program to provide a direct path from high school to the pharmacy program for students who are interested in becoming pharmacists."

The seven students – all women – in the first GrizRx Assurance Program class, which started fall 2021, come from towns across Montana including Polson, Chinook, Billings and Dillon, and one just across the Montana line in Williston, ND.

To be considered for a reserved seat during their two years of initial study, students in the GrizRx Assurance Program, must complete all pharmacy pre-requisite classes. For successful admission to the doctor of pharmacy program, they must maintain a cumulative GPA of 3.0 and log 20 or more hours of observation (preferably in a pharmacy) among other requirements.

"We all study a lot." Flores said, adding that support they get from fellow students in the program helps make the rigorous course work easier, as does time spent with pharmacy students and faculty.

"We're definitely not alone," said Matteson, adding that she's become close friends with all of the students in the program.

Rachael Zins, UM's pre-pharmacy coordinator and a UM pharmacy graduate herself, said many budding pharmacy students, particularly those from small towns, point to their hometown pharmacists as role models. Zins and other pharmacy faculty encourage students to explore the diversity of pharmacy fields including home care, veterinary and oncology.

From this inaugural class, the school plans to more than double the GrizRx Assurance Program to 20 students, she added, and is actively recruiting across the region.

Matteson and Flores know being a part of the first class will make them role models for students that follow. Although it will be six years of tough study and work, both are already looking forward to their ultimate field of practice. Matteson said she is leaning now toward hospital-orientated pharmacy. Flores said practicing as a traveling pharmacist in the state would be an interesting option.

"I like to be home with family," she said.

UM's Skaggs School of Pharmacy offers one of the most affordable PharmD programs in the U.S. with one of the lowest debt-to-income ratios. It is a student-centered program with small classes, low attrition and high on-time graduation rates. Upon graduation, 95% or more students are employed and more than 70% of its students go on to practice in Montana.