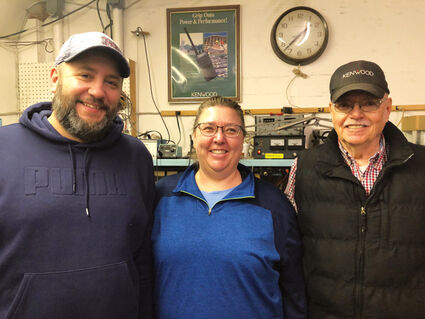 Damm who was born in Sidney, is a 1993 graduate of Sidney High School and earned an electronics degree in 1995 from DeVry Institute of Technology, Phoenix, AZ. In 1997, he began his radio business career at Joriga Electronics, Tempe AZ. In 2007, he moved to Billings and worked at Priority Communications and in 2010 he moved on to become Industrial Communications' service manager in Billings.

He and his wife, Melissa, who is a Sidney Middle School Special Education teacher, will be serving all of Richland County and the MonDak area.

"I had always told Larry that if he ever wanted to sell that I would be interested and I would like to move "back home." He finally took me up on the offer.

"People are different here. As you meet and visit with people here, they are just friendlier." said Justin.

When asked how he got into the business Denowh laughed and said, "After working here for ten years. The previous owner, Rosealea said you're going to buy a business today" and she made me a deal I couldn't refuse.