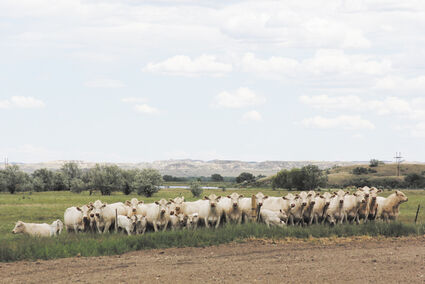 Howard Rambur started his herd as a youngster with two crossbred Charolais heifers and a purebred Charolais bull. "I got a small loan from the local bank and was on my way to having my purebred business. Of course, I've been borrowing money ever since," said Rambur, who raises purebred Charolais cattle near Sidney, MT.

Even though his father was primarily a sugar beet farmer, young Rambur's interest in livestock was piqued when he began working with cattle as 4-H projects. He wanted to own something different than Angus, and the powerful, white Charolais cattle caught his eye. In the late 1960s, the breed, which originated in eastern France, arrived on the scene in Montana. Rambur decided to make the Charolais breed his life's work as he admired their outstanding performance and especially found that crossbreeding created a superior bovine.

Rambur cows and bulls are raised on the western side of Sidney in some rough country. "You need a good horse and dogs to move cattle out there," said Rambur. "I find that Charolais have better bone and feet, which causes them to have longevity. I have a lot of customers who are using our bulls up to six years of age, which is double the longevity of other breeds."

Although he credits the Angus breed for their "tremendous job marketing their meat," Rambur pointed out that crossbred cattle provide hybrid vigor and have been bringing an extra 10% in sale weight. Because of that, not only does he have Charolais bulls, but also an Angus herd.

Their bull sale the second Saturday of April is generally well-attended with 80-100 head of Charolais and Angus bulls seeing their way across the auction block. Rambur said in 2020, a smaller crowd than usual because of the pandemic hit them hard, causing a loss of about $100,000 in sales.

He is curious where the beef prices are going to go. "I don't know where this is all going to transition. It will be interesting. Everyone in the cattle business needs to start making money. It shocks me that we are still selling fat cattle the way we are when we need to be moving our meat and product better. With COVID, many of the restaurants are half empty and those were the restaurants that were buying high-end steaks. Even before COVID, but even more so now, people want to know where their meat comes from. More people are looking closer to home, so we are seeing a real shortage of small packing houses to handle the increasing number of ranchers wanting to have cattle locally processed. There are only a few large packers now and you have to play their game as many are foreign-owned."

Rambur livestock has expanded their sale opportunities, selling cattle and meat to foreign countries; breeding stock has been shipped to Turkey while fat cattle have been shipped to JBS, Greeley, CO, to be processed for the Chinese market.

Rambur talks about how the international connections happened. The Turkish connection started when an exporter driving through Virginia spotted some "buckskin" (Charolais/Red Angus cross) in a field and asked what they were and their origin. Howard Rambur was contacted, and the Turkish exporters visited three times to develop a plan.

"The Turkish visitors told me that Montana looked like Turkey. We talked about agricultural production, and it turns out they are very modern," said Rambur. "They farm with center pivots and John Deere tractors. At the time we were working out the details, war with Syria was going on and Turkey had an influx of refugees. They realized the need for producing food for an expanding population."

Rambur coordinated the shipment of 700 buckskin calves and 900 silvers (Charolais x Angus) with the balance of the load Red Angus and Angus for a total of 2,400. Numerous tests, blood work, papers, and various quarantine sites later, the cattle shipped in early February 2017. The boat ride took 30-plus days. The cattle were dispersed into different areas of Turkey and are being used for breeding stock to help boost the country's meat industry in future years.

As for beef to China, Rambur had been dealing with JBS and they asked him to sign up to send some of his cattle/beef to China. He sent four pot loads of cattle to be processed.

Although exporting provides another option for cattle marketing, Rambur explained, "I get exporters calling me all the time, but the money exchange rate is horrid. Keep in mind when you deal with foreign counties, it's good to deal with the same exporter."

In addition to raising purebred bulls and sending their livestock across the ocean, a unique service provided by the ranch is feeding bulls in the feedlot. Many custom yards won't accept bulls because they're, well, bulls.

"You need to understand the bull mentality," Rambur said. "Our RC Feedlot has always fed purebred bulls, performance breeds as well as cull bulls. Rambur Charolais offers a bull buy back. When a customer is ready to change bulls out, we will purchase the culls at a premium, feed them at the RC Feedlot, then send them on to the processors."

"Bulls are better than feeder cattle because there is a quick turnaround. You feed them for 30 days and they're gone. I know bulls and I can put quick weight on them. Plus, it's a constant market even in the winter and it works well because I have my own trucks. When the processor needs a full load of bulls to kill, I can fill those spots quickly instead of their buyers going to many sale barns." 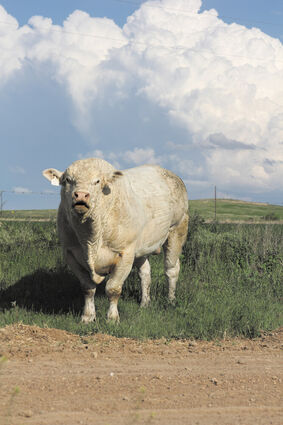 The hard-working rancher hopes his grandkids will continue to appreciate ranch life; they help with various aspects of the ranch, and all have horses to ride when help is needed. "We try to get them involved as much as we can. One of my grandsons is 14 and this year he hasn't been in school much due to COVID closings, so he has assisted with calving and wants to learn more from me. He received a beginning rancher loan from Community Bank, Dickinson, ND to purchase five purebred bred heifers. I applaud that bank for doing that," said Rambur.

Despite the challenges of juggling the purebred business, running a feedlot, and keeping up with the markets, Rambur said he wouldn't trade ranching for anything.

"Whether I'm working with the cattle, watching my dogs working or having my grandkids join me on the ranch, you can't beat it. We have a fantastic lifestyle."