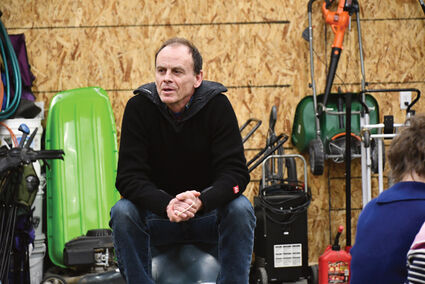 Ballard is running against fellow Democrats Penny Ronning and Skylar Williams in the upcoming primary June 7. The US House of Representatives seat for the 2nd Congressional District is currently held by Rep. Matt Rosendale. Rosendale faces primary challenger Mary Todd.

Ballard is from the Red Lodge area and is currently a full-time, freelance writer and photographer. He is nationally renowned outdoor writer and photographer covering primarily hunting, fishing, wildlife biology, conservation and general outdoor recreation. Before becoming a writer, Ballard taught at MSU-B for over a decade. He's also held positions as a minister, manager for a fencing contractor, roofer and temporary laborer.

Ballard grew up on a farm and ranch west of Three Forks. Growing up he learned the value of hard work on the farm. Ballard graduated college from Yellowstone Baptist College, Billings, and the Southern Baptist Theological Seminary, Louisville, KY where he also earned a Masters of Arts degree at the University of Louisville. Subsequently, he completed a Masters of Education degree from MT State University-Billings (MSU-B).

Ballard feels he connects well with working Montana's. He feels his positions on job and wages such as increasing the minimum wage, changing corporate executive pay and strengthening labor unions better fit with the needs of Montana workers.

Some of the other topics Ballard discussed were adjusting the tax code for corporations, the need for additional health care reform and preserving the second amendment. For more information on Ballard and his stance on issues visit http://www.ballardformontana.com.

Ballard is currently expected to visit Sidney again for the Democratic primary candidate forum on April 23 at 6:30 pm at the Elks Lodge in Sidney.