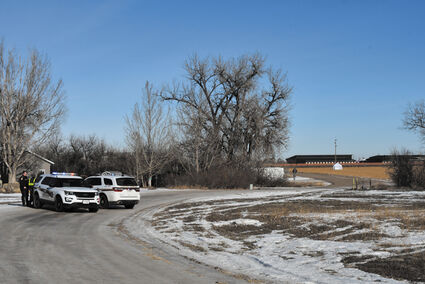 Richland County Sheriff's Deputies control access to a road near the location of the remains on Jan. 20.

Human remains were found on Jan. 20 during a search for Katelynn Berry near Sidney. It has been reported that the remains were approximately 1100 feet from Berry's residence in an area that had not been previously searched. Berry was reported missing on Dec. 31.

The Sidney Police Department released the following statement on Jan. 20:

At approximately 9:20 am, one of the volunteer search teams, searching within one of our pre-defined search areas, discovered what appear to be human remains. The Richland County Sheriff's Office, members of the Montana Division of Criminal Investigation, as well as other law enforcement assets have secured the area and are actively processing and documenting the scene.

At this time no identification of those remains have been made, however, further search efforts have been suspended. A post-mortem examination will be scheduled and conducted by the Montana Medical Examiner's Office in Billings in the next few days, and it is our hope that a positive identification can be made at that time.

On behalf of the Richland County Sheriff's Office and the Sidney Police Department, I would like to express our sincerest gratitude and respect to our civilian volunteers and area law enforcement partners for their overwhelming support in this effort.

This is a developing story.