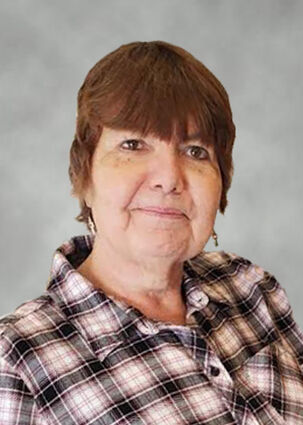 Pearl Marie was born on July 1, 1947 to parents Melvin Sheldon Rink and Bertha Agnes Rink-Stompro (Heinemeyer) in Hebron, ND. She was 1 of 10 children. During her childhood and due to her father's work, she moved often and lived in many different communities. Around 14 years old Pearl joined the workforce and that was where her love of restaurant work and baking began.

Pearl was united in marriage to Sidney Sivertson in 1965. During this union they were blessed with a beautiful baby boy Terry. They made their home in Keene, ND and few years later Pearl and Terry moved to Williston, ND.

Pearl married Paul Eugene Haney on December 31, 1971 and Williston is where they called home. Through the years the children of the family considered Paul and Pearl's to be a second home. Many days and hours were spent enjoying her company and cooking. She showered all the children of the family with her love and kindness. She was always a shoulder for those in need of some extra love and understanding.

Her life's career was working in restaurants, but Dakota Farms is where she found people she called her extended family. That is where she baked for nearly 25 years. She treated each of the customers and staff as if they were her own family and they loved her back in the same way. Even when she wasn't working, she would go sit and have coffee and often serve coffee if the waitresses were busy. There wasn't a single person that she didn't find a kind word for. She adored her family and friends, and many sought her out as their refuge and protector. When family stopped at the house for a visit she would invite them to have coffee or a sandwich at the restaurant. It wasn't uncommon to walk in the restaurant and see Pearl, Shirley, Curtis and Sharon sitting in their favorite booth drinking coffee and chatting with all the staff and customers. Whether it was in the restaurant or at her house she was always taking pictures and you can count on it being on Facebook immediately!

Over the years Pearl had many hobbies including painting, baking, feeding the squirrels, crafting with her great granddaughter and spoiling her grandchildren. When she did something, she was "all in". If her favorite color was pink, then everything had to be pink. She was loyal to her favorite places and favorite things. When anyone left her house she would stand at the door and be sure she watched as you drove away. One thing is for sure, if you looked back she would be there until your car was out of her sight.

If there was one thing, she wasn't very good at it would be driving. She could manage to get herself back and forth to work but if she needed to make a trip to Menards or maneuver a roundabout you better look out! She once drove right over top the roundabout instead of circling it as it was meant to be. Shortly after that incident her muffler was replaced.

Her greatest love in life was being a mom to Terry. When he came to town on Thursdays, she would stop everything and show him off to everyone at Dakota Farms. She would talk about it for the next 6 days until she saw him again. Everyone knew he had been to town and what they did while he was there. There was never a doubt how loved he was by her and how very proud she was of him. Terry was blessed to have had Paul for a dad and Pearl for his mother. He loved her with all his heart, he cherished each Thursday they spent together and will hold those memories close to his heart.

This world will not be the same without our beloved Mother, Sister, Grandmother, Great grandmother, Auntie, cousin and dear friend. Let's honor her life by showing each other all the love and kindness she showed to each one of us.