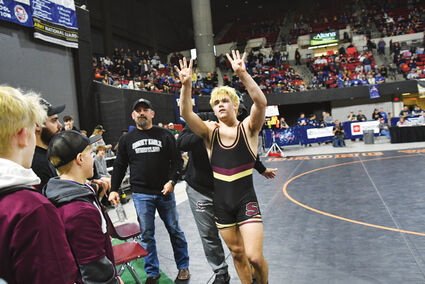 Aden Graves receives a congratulatory pat on the rear from coach Guy Melby after winning his fourth state title at the Montana State High School Wrestling Tournament in Billings Feb. 11-12. His father and assistant coach, Ty Graves, watch with pride as the crowd cheers.

When Aden was asked how the journey has been to get to four in a row he replied, "It's been too short. I wanted it to keep going. It's been fun definitely and I wouldn't trade it for the world."

Aden comes from a wrestling family. His father, Ty, has been an assistant coach for the Eagles for many years. His brothers Ethan and Kade were wrestlers before him and his little brother, Reece, is now a freshman with a state title under his belt as well. "It stems from my dad. Letting us wrestle when we were little," he stated. "The mentality was to go out there, have fun and wrestle hard. That was the expectation,"Wrestle Hard."

Aden was confident coming in to this year's state tournament. "Coming in I was a kind of nervous," he stated. "But everyone kept saying, 'Last one enjoy it,' so I tried to enjoy it as much as possible. There's nothing else I can do that I haven't done all year. So just relax, have fun and enjoy it."

"I was really nervous about the team cause I wasn't sure how that was going to shake out," he said. "I was super nervous for Reece cause he hadn't wrestled that kid yet." Aden was referring to Reece's championship match against Ronan's Ridge Cote.

Aden hasn't made a decision yet on his plans after high school. "That's the big question everyone keeps asking me," he said. "I don't know yet." For now Aden will continue wrestling after state. He will be going to state AAU, Virginia Beach for High School Nationals, Fargo for Junior Nationals and Florida Scholastic Duals this summer.

"There's still a lot of wrestling to be done. I'm sure we will figure out a college thing soon," he concluded.

Aden is the third wrestler from Sidney to place first at the Montana State Wrestling Tournament four years in a row. He will now join the ranks of wrestling standouts Jessie Obergfell and Gresh Jones as Sidney's four timers.