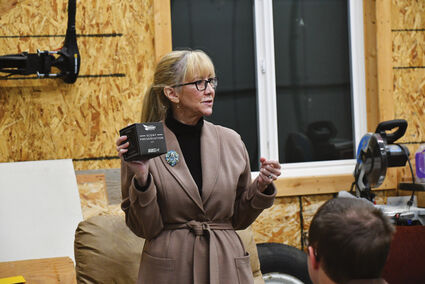 MT U.S. House Candidate Penny Ronning holds an Elizabeth Smart Foundation Scent Preservation Kit that can be used by authorities to aid in the search of a missing person.

Ronning currently serves on the Billings City Council. A post she has held for the past four years. During her time there she has prided herself on being able to cross the aisle to get things done. She has worked with staff members from Senator Tester's office as well as Senator Daines' and Governor Gianforte's staff.

Ronning was born in South Dakota to parents with strong agricultural backgrounds. In the 1970s her father purchased a restaurant in Billings. At his restaurant, Ronning's father sourced local beef and produce unlike many others in the industry at the time. "My dad's Ag roots really developed a value system where the food we provided was locally produced," she stated.

On the Billings City Council, Ronning has also worked extensively on public safety, energy cost savings, mental health and substance abuse among many other issues. She was eager to visit Sidney because the area shares ties both economic and criminal. "Sidney and Billings are very intricately attached through crime and through economic reasons as well. What we watched in Billings happen when the Bakken started to reach its peak is when crime in Billings began to increase as well," Ronning said. At the time, Billings, had an underfunded police force allowing cartels to move in. Even though the activity in the Bakken has since slowed down, the crime in Billings has remained. Confronting this problem has been one of Ronning's biggest issues on the Billings City Council.

Ronning has positioned herself as centrist candidate. Through her work on the Billings City Council and other committees she has worked with Republicans to get real results. "I was raised to believe in people over politics and that is how I am running my campaign," she said. "I'm a worker. So when I say I'm a system changer. That's what I want you to know."

Ronning will be joining, Jack Ballard, her fellow Democratic candidate for U.S. House of Representatives for the Montana 2nd Congressional District for a candidate dinner on April 23 at the Elks Lodge, Sidney. The Montana primary will be held June 7, 2022.