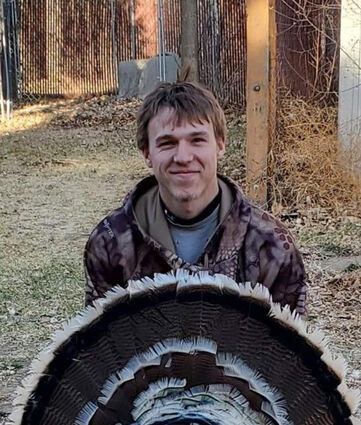 Funeral services for Garrett Basta, 23 of Sidney, MT are at 2:00 P.M., Saturday, February 26, 2022, at the Richland County Event Center in Sidney, MT with Pastor Paul Turek officiating. Fulkerson-Stevenson Funeral Home of Sidney is caring for the family. Remembrances, condolences and pictures may be shared with the family at http://www.fulkersons.com.

Garret Basta left for better hunting February 18, 2022. Every flush of pheasant, every flock of geese will forever be a memory of Garrett Basta. Every lab bounding through the field will infuse us with a touch of his endless energy.

We do not bid Garrett Basta goodbye, we bid him “Good Hunting”

Garrett lived life at full speed, with an open heart. He greeted everyone warmly, with an energy that just made you happy. You would always see the “Garrett Grin” as soon as you made eye contact. No matter who you were or how long it had been since he’d seen you, he made you feel that you were making his day- just by being there. Making other people feel good is life’s best skill and Garrett did it well.

Garrett Basta was born May 30th 1998, and thus began the short but amazing life of a young man who treasured every day and everyone.

Garrett was baptized and took confirmation at the First Lutheran Church in Savage. His Pastor called him the “Question Machine” because he never ran out of questions about the Bible.

Some of Garrett’s first adventures were as a pee wee wrestler. He didn’t win every match, but entered every match with an uncontrolled passion that, just as in life, sometimes gave him great victories, but often surprised him with sudden defeat. Garrett, cried after every match – win or lose. When he lost he felt bad about letting those around him down. When he won, he felt bad for the kid he defeated. He just wanted everyone to be happy.

Garrett love playing Cal Ripken baseball with all his buddies and his brother James. He was a natural athlete and adapted to playing whatever position he was asked. Garrett was good on the field, but what he really enjoyed was the people and adventures that came with the game. He enjoyed the 10 hour car rides because they gave him a chance to ask a thousand questions to whomever he was riding with.

Garrett’s true passion as a kid was enjoying the wilds of Montana with his family. Whether it was hunting, camping, or fishing, Garrett stretched every day to its limits. The darkness was his enemy. He would exhaust himself in every activity; then battle going to sleep at night by asking questions and telling stories until his tired body faded off to sleep.

When Garrett, was nine, he lost his greatest hunting and fishing partner, his father Mark. Garrett took this devastating loss, determined to enjoy every day and everyone. Hunting and fishing became even more of a passion. Nothing fed his soul more than a day in the field with his first hunting dogs Jesse and Bindy and his Uncle Clay or Grandpa Ed. The hunt gave everyone a reason to gather and tell stories while Bridget created a delicious meal out of whatever had been harvested.

In high school, Garrett met Sarah Toth. She fell in love with the “Garrett Grin” before she fell in love with him. He continued to capture her heart by putting his stinky feet on her books. Sarah became his partner in life and his best friend. They loved each other and all their furry, four legged babies.

After high school Garrett was taught to weld by a great mentor, Elliot Fjell and he did it like he did everything else – full speed. When he talked about work, it was never work, it was another adventure and another story to tell. The tougher the job, the longer the day, the better the story.

To his family, Garrett was that constant connection every family needs. It’s amazing how many family conversations started with, “Did you see that picture that Garrett sent?” He kept in contact with everyone through texts, phone calls, videos and pics.

It became apparent to Garrett, that between upland birds, waterfowl, big game and fishing, there were still not enough hunting and fishing seasons; so he taught himself to trap. In addition to work, hunting and fishing, he ran a trap line, sampling the meat from virtually every animal he trapped (beaver anyone).

In the past year, he trained his 2 newest hunting partners, Lilo and Piper who flushed pheasants and fetched geese until exhaustion for Garrett.

Garrett was preceded in death by his Grandmother Patricia Larson, His Father Mark Basta and All his Maternal & Paternal Great Grandparents

In lieu of flowers please make a donation to the charity of your choice in Garrett’s name.