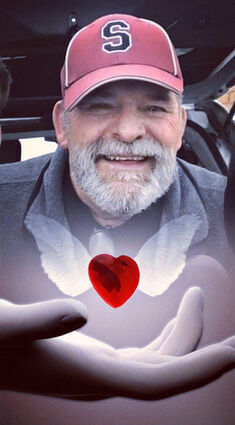 Paul Dean Quilling aka "Smiley or Papa Paul" was born July 22, 1952 to Gordon & Nadine Quilling. He was raised a Sidney Eagle graduating in 1970. Paul grew up in a sports family and was a very talented athlete competing in football, basketball, track and baseball. The long jump was his favorite or broad jump as he referred to it. He was very humble about his athletic accolades. He attended the University of Montana Western on a football scholarship.

His sophomore year of high school, a girl from Hardin moved to Sidney and stole his heart! Paul and Susie dated all through school and married in 1972. They were blessed with two children; Chad and Kari. Paul devoted his whole life to his family. He was the proudest husband, dad and papa. He spent his free time following Sidney sports. The stands won't be the same without him. Papa was hard to miss in the stands whether it was his loud, honest, grumbly voice or just seeing his larger than life bad ass handle bar moustache and beard. He traveled many miles to different states, even boarding a bus or two and never complained once! If he wasn't at a sporting event, he was out hunting with his friends and family. He also enjoyed collecting rocks and trapping. Paul was a hard worker. His first year after college he worked on the drilling rigs in many states with his brother Doug. Later in life, Paul worked at Sidney Sugars where he was a knife setter, a job he exceled at and enjoyed. Paul also roofed with his son Chad and son-in-law Darold for 14 years. After his roofing days ended Paul found his dream job, one that was his favorite and fit him perfectly. Paul ran the sweeper for the City of Sidney for the past 7 years and truly enjoyed going to work and mingling with his fellow city workers. The streets of Sidney will not be the same without him driving his sweeper around.

Paul knew the secret to life and happiness long before it was the "buzzwords" it is now. His greatest times were times spent with his family. From baking cookies with his wife Sue, going on drives with her, traveling to sporting events which included the bonus of going out to eat. He embodies being present and intentional with his time. He would drop anything to help, even if it was just supervisory help. He loved going to the cabin at Blacktail and playing washers and cornhole. He was a diehard Minnesota Vikings fan and he and Kari took a bucket list trip to watch his beloved football team at the new US Bank Stadium.

He was the best story teller and he enjoyed coming up with tall tales just to see if you would take the bait! He could nap anywhere and his loud obnoxious snore was unforgettable.

He will be missed by any who were lucky enough to know him.

Paul passed away on February 20th at the Sidney Health Center surrounded by his family due to COVID complications. He was preceded in death by his parents, Gordon & Nadine Quilling; his two older brothers Doug and Steve Quilling; nephew Shane Quilling & George Groesbeck; Father & Mother-in-Law Ray & Rose Rumfelt.

Cremation has taken place and a Celebration of Life will be announced in the summer. Because of Paul's love of sports and the Sidney Eagles, the family will be setting up a Scholarship to be awarded to a deserving student athlete from SHS. Donations can be made to: Paul Quilling Memorial Scholarship, 623 5th ST SE, Sidney MT 59270.