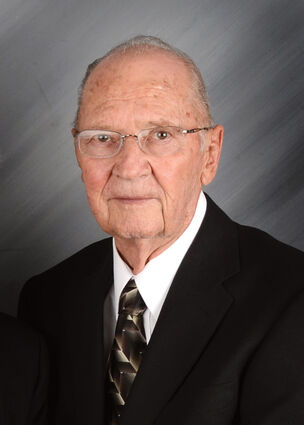 Funeral services for Albert H. "Bud" Groskinsky, 89, Sidney, MT are at 11 a.m., Thursday, March 3, 2022, at Pella Lutheran Church, Sidney, MT with John Carey and Pastor Audrey Rydbom officiating. Interment will be in Sidney Cemetery, Sidney, MT under the care of the Fulkerson-Stevenson Funeral Home, Sidney, MT. Visitation will be 10 a.m.-5 p.m., Wednesday, March 2, 2022, at the funeral home and one hour before services at the church. Masonic Service will be at 6 p.m. on Wednesday, March 2, 2022, at Fulkerson-Stevenson Memorial Chapel, Sidney, MT. Remembrances, condolences and pictures may be shared with the family at http://www.fulkersons.com.

Albert "Bud" Harry Groskinsky was born in Sidney MT to parents Albert and Marie (nee Klempel) Groskinsky on Sept. 30, 1932. Bud's brother, William "Bill" Grover Groskinsky joined the family, 2 ½ years later. The brothers attended the Anderson school near Crane until moving into Sidney. Bud's mother passed away unexpectedly when he was 15. Thankfully, the Cenex café provided a more balanced daily diet for their lunch, as his dad's one specialty was steak in a cast iron skillet.

Bud graduated in 1951 from Sidney High School, achieving the American Farmer Award in FFA. He farmed for the next four years, until he met Anne Lynde. Following her graduation, they were married June 1,1955, and began a 66-year journey of love, learning, and laughter. Bud and Anne attended college together, first in Bozeman, MT, then moving to Rocky Mountain College, Billings, MT. Bud graduated with a degree in chemistry, while Anne graduated with a degree in medical technology, and they were life-long supporters of RMC. St. Louis, MO was their next destination for a year of advanced medical school.

Each summer between semesters, Bud and Anne returned to Sidney to help on his family farm. Farming proved to be his true calling, and thus they returned to Sidney and stewardship of the land they love and nurture to this day. Bud worked at Sidney National Bank, as a loan officer, then as president until his retirement, in addition to being a bank board director. During these years, in addition to Bud's banking duties, they farmed each summer and enjoyed traveling to different countries during the winter. They explored 34 different countries, learning their cultures while meeting a variety of people along the way in their quest of nature and adventure. Excellent photography became an integral part of these trips, (before digital), which they lovingly shared with the community. For many years, Bud successfully raised registered oats and wheat, in addition to other crops and wildlife plantings. Bud continued adapting and implementing the newest technology in farming, with research and a life-long pursuit for improvement. He served on the Lower Yellowstone Irrigation Project board for 24 years. He helped Dr. Jimmie Ashcraft break ground on the fitness center at Sidney Health Center in 1985. He is a founding member and board member emeritus of Foundation for Community Care, supporting their goal of keeping good affordable healthcare in our community. Bud and Anne became ham radio operators, and each were licensed pilots, flying their Piper Cub and Skylane airplanes for many years, with their black Labs at their side. Bud and Anne spent numerous hours improving the Eastern Montana Bible Camp property near Lambert, MT. They established the Groskinsky Foundation, providing scholarships to deserving area graduates for many years, assisting with their college expenses. The Foundation also donated to local projects including the Richland Ranger Hockey building, and a final donation from the Foundation was to the Boys and Girls Club new facilities, annexed to the Methodist Church. Bud and Anne shared their love of nature, exploring the Badlands of Montana and North Dakota, while introducing this beauty to friends, on outdoor adventures, and with many gorgeous photographs, in addition to Go-pro videos in recent years.