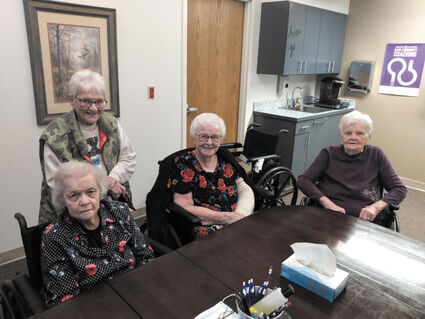 When one hears of a 75th High School Reunion one thinks of invitations, balloons, music, and the high school gym rented out for a few alumni to catch up and reminisce. No one thinks of the extended care unit of their local hospital, yet, for four residents at Sidney's Extended Care Unit, that is how theirs came to be.

Gilda Buxbaum, Ruth Pederson, Peggy Zadow, and Elsa Banyai all graduated from Sidney High School in 1947, 75 years ago, and ended up back where they took that step out of adolescence for their golden years. Even back then, however, graduating from the same school did not mean you were all the same. Peggy lived outside city limits and was even able to ride her horse to school but did not live far. Elsa and Ruth's families lived far enough away, over 50 miles for Elsa, from Sidney that they had to stay with relatives and friends who lived in Sidney during the week. Gilda's family did not even live in Montana. Her family lived south of Watford City, ND. She started out going to high school there but her sophomore year she stayed with her aunt in Williston so she would not be alone while her uncle was serving during World War II and attended school there. For her senior year, the pastor of a church in Sidney and his wife approached Gilda's father and asked if she could play the piano for their church. Everyone agreed. She moved to Sidney, played through the rest of her schooling, and for decades afterward.

Peggy, the true Sidney native, graduated at the age of 16 but stayed in town after graduation. She had just one child and had worked at the theater, Lower Yellowstone Rural Electric Association, and the stockyards. She was at the stockyards for 50 years. Gilda stayed in Sidney as well. "I married a Buxbaum."she told me. Other than playing piano in church, Gilda also worked for Richland Bank and had four kids. Ruth left for Billings with her sister. She was a telephone switchboard operator. She married and had five little ones. Elsa moved the furthest, to Boulder, MT. Boulder is in western Montana between Butte and Helena. She worked as one of the staff members at a nursing home there. She married and had four kids. Life was harder then, and amid the fond memories of children playing and swimming in the irrigation ditches were sad and bitter ones of children dying long before their time, good men who never returned from war, and fine husbands lost to disease and accidents.

Amid all of their adventures, all four made it back here to Sidney. Gilda volunteered at Sidney's Extended Care for 50 years before moving in. Ruth moved in a week before Thanksgiving, 2021, but their lives are not done yet. At Extended Care they get to play Bingo and card games. They also get to go on bus rides and to special events out in the community. A little while back Gilda got to help put a history book together for the residents. She found her former classmates and now they are together and good friends from long ago enjoying a year-long 75th High School Reunion.