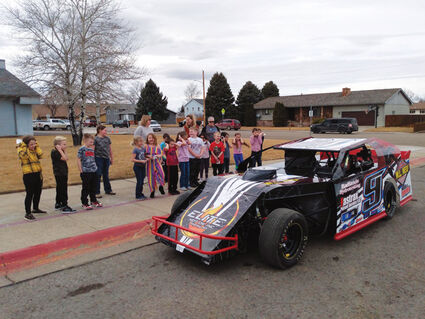 Philip Keller starts his #9 car and it roars to life for the kids. (Photo by Jaymi Mozeak)

On Tuesday, March 15, the first graders in Mrs. Topp's class got an exciting end to their school day.

Philip "Mr. Incredible" Keller brought his number 9 IMCA Sport Mod Racecar to West Side Elementary School, Sidney, to show it off to his youngest son, Cale's, classmates. He came along with his wife, Shana, and mother, Nina. Philip lifted the giddy 6 and 7-year-olds into the cab, answered their questions, handed out stickers, and started the vehicle up for them, to screams of delight. I asked him why he decided to bring the car that day. He said, "I had the day off." Philip lets his sons help him pick out the wrap, a large vinyl graphic or decal, for his car which has granted him some fun, kid-friendly themes. The wrap he had in 2017 was Lego themed. The wrap in 2019, The Incredibles themed, earned him his nickname. This year's Spiderman theme was Cale's Idea. Philip said, "Spiderman is his (Cale's) favorite." I asked Shana about the wraps and she said, "It makes it fun for the kids when they come to the races."