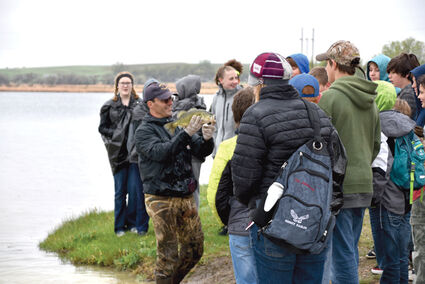 The MonDak Chapter of Walleyes Unlimited organizes and funds for Kids Fishing Day at Gartside Reservoir. During the 2018 Kids Fishing Day Mike Backes from the Miles City office of MT FWP shows the students a large mouth bass.

The Walleyes Unlimited MonDak Chapter will be holding their annual banquet and membership drive April 2 at the Richland County Event Center, Sidney. This public event begins at 6 p.m. with tickets available at the door. The cost is $60 for a single ticket and $70 for a couple. The price includes a yearly membership and subscription to the Walleyes Unlimited "Fish Tales" magazine.

The event will bring back the favorite activities from previous years including the ever-popular fish fry. The club volunteers will be using the delicious recipe invented by long time Walleyes Unlimited supporter Jim Rettig. There will also be door prizes, fish games, raffles, 50-50, silent and live auctions. Some of the prizes include a power auger, patio set, BBQ setup walleye art, rod & reel combos, two 6.5 Creedmoor rifles, guided fishing trip, and much more. The ladies only prize this year is spa package.

This year marks the 25th anniversary of the Walleyes Unlimited MonDak Chapter. Founding officers Doug Hill, Scott Sundheim and Kevin Mayer chartered the chapter in 1997. Throughout the past years the volunteers have grown the Chapter to one of the top 3 Chapters in the state. The MonDak Chapter has had two members elected into the state hall of fame. Doug Hill and Bob Gilbert.

The chapter has funded, contributed or organized over 21 projects to promote fishing and recreation in the area since its origination on May 15, 1997. They have held fishing seminars, organized and funded the yearly kids fishing day for sixth graders in Richland County, contributed to hatchery funds and funded local fishing tournaments. At the MDU Bridge (Sidney Bridge) fishing access site the chapter had purchased picnic tables, funded garbage collection and aided the Montana Fish Wildlife and Parks department renovate the boat ramp. At Gartside they have funded garbage collection and assisted the state in providing a handicapped fishing access. At Richland Park the chapter has helped fund the Richland Park signage, planted trees, contributed to the playground facilities, boat ramp and installed solar lights.

The chapter has also assisted other Chapters in the state to promote warm water fishing outside of Richland County. They funded fish cleaning stations for the Wolf Point and Glasgow chapters and contributed to repairs to a boat ramp for the Malta chapter. The chapter has also funded a memorial to the late Jim Rettig.

Come out to the event center April 2 and enjoy a great walleye fish fry.