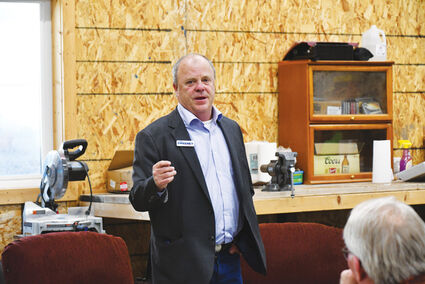 Sweeney grew up in Miles City and graduated from Custer County High School. He holds a degree from Western Montana College in Dillon. Sweeney is a third generation Montanan. Sweeney drew a stark contrast from his other opponents. "I grew up in eastern Montana," he stated. "I know the people I represent pretty well."

Sweeney has vast and varied work experience across the state. He worked on the early construction of Colstrip power stations 3 & 4. Sweeney fought wildfires during the summer months while attending college and he has worked on farms and ranches moving irrigation pipe, moving cattle, branding and shipping calves. He is also an avid hunter.

Sweeney believes in people before politics. "It has served me well in the legislature. I have a strong reputation for being able to work across party lines," he said. "My opponent, Rosendale, is part of the right. He is only going to work with his people." Sweeney spoke of various times he voted against his own party for the needs of his constituents during his time in the Montana legislature.

Sweeney will face fellow Democrats Penny Ronning and Skylar Williams in the Montana primary on June 7. The general election will take place Nov. 8.

The Richland County Democrats will be holding a candidate forum and dinner on April 23 at the Sidney Elks Club. The event begins at 5 p.m. with a social meet and greet followed by dinner and entertainment at 6 p.m. The forum will begin at 7 p.m. The cost is $15 per person. For reservations call 406-480-1706 or send your name and number attending to [email protected] Payment will be collected at the door before the event.