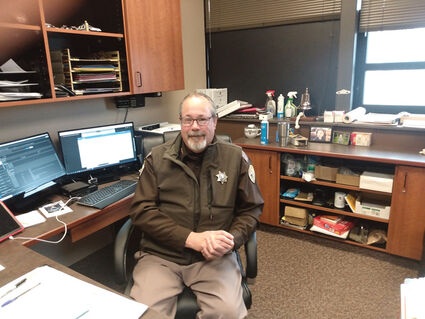 Sheriff Dynneson said, "It is our responsibility to ensure that we provide a safe and secure place for all inmates housed in our facility." (Photo by Jaymi Mozeak)

When Lieutenant Governor Kristen Juras visited Sidney, Feb. 19, many different topics of concern were brought up by the local officials. Among them, Richland County Sheriff John K. Dynneson brought up people with mental health issues sitting in jail when they did not belong there.

The NAMI 2021 fact sheet for the state of Montana states that "About two in five adults in jail or prison have a history of mental illness and seven in ten youth in the juvenile justice system have a mental health condition." It also said that "One in four people with a serious mental illness has been arrested by the police at some point in their lifetime, leading to over two million jail bookings of people with serious mental illness each year." Sheriff Dynneson says, "It is not uncommon to find that a portion of the inmate population may have a drug addiction with an underlying mental health issue." He went on to say, "Inmates are not incarcerated in jail based solely on their mental health issues. They are there because they are suspected or convicted of committing a crime." There is a problem with that, however. When a person is arrested in the state of Montana who has mental health issues that may prevent them from being fit enough to stand trial they have to be evaluated. According to Richland County Attorney Janet Christoffersen, "that could take a while". She explained that in that case, a person would need a criminal commitment to the Montana State Hospital for evaluation in Warm Springs just northeast of Anaconda. Christoffersen said, "We have six months to get a suspect to trial but it's been taking nine months to get an evaluation." At six months they have to be released with no help for their problems. They become repeat offenders and end up back in jail. She said, "I feel like a social worker instead of a prosecutor. I'm not trained for that." She also said that people who were sent to the State Hospital for civil commitments, when they did not commit a crime, are recommended to stay there for up to 90 days but are only kept from three to seven days because of a lack of resources.

Christoffersen also mentioned that she felt programs for mental health and addiction treatment are underfunded in Montana. She said, "There is not a lot of intervention for people with mental health issues prior to them being in the court system." There are several mental health counseling centers, a few rehabilitation, and treatment centers throughout Montana. Almost all of the inpatient rehab centers are in Billings and western Montana. Plus, the courts can not force people for civil or criminal commitments to a private facility, just the State Hospital.

Still, both Attorney Christoffersen and Sheriff Dynneson both agreed that everyone is doing the best they can. Richland County has hired an APRN whose primary course of care is mental health. Dynneson said, "Several counselors within the Sidney area also can be called to the jail for their services." Christoffersen also said that several within the justice system have been looking into a pre-trial diversion program for nonviolent offenders. This program would divert the offender into therapy or a special court. Sheriff Dynneson said, "Incarceration can have a significant impact on one's mental health. We recognize those are issues directly affecting the health of the individual as much as any other medical condition."

The National Alliance on Mental Illness fact sheets for any state can be found on their website, http://www.nami.org.