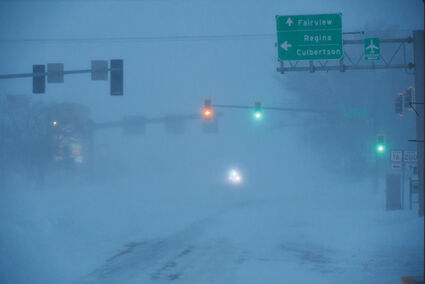 Richland County authorities turn back drivers leaving Sidney from all directions on April 13.

Tuesday, April 12, and Wednesday, April 13 the MonDak area was struck with a snowstorm the likes of which it had not seen since 1997. Winter Storm Silas tore across eastern Montana and western North Dakota causing closures and delays all across the area.

According to officials at the National Weather Service, Glasgow, the storm began in the Pacific Ocean and made landfall in Oregon. The storm was dropping record amounts of snow from the beginning, leaving the first accumulating April snow since 1940 in Portland, OR, according to The Weather Channel's article, "April Blizzard Pummels Northern Plains; Brings Feet of Snow to North Dakota, Montana" on http://www.weather.com. The article also said it crossed the Rocky Mountains, dumping immense amounts of snow, 36-47 inches near Pony, west of Bozeman. It snowed two to three inches per hour Tuesday in Billings, piling up to a total of 13.9 inches. Interstate 94 was closed from Billings to Jamestown, ND, cutting off a major travel route for people, freight, and mail throughout the two states. The MonDak area began to shut down. Sidney Public Schools had already canceled classes for April 12 and 13 the day before. Culbertson Schools closed early on Tuesday and the whole day Wednesday because of the weather. Wibaux Public Schools closed early but went virtual on Wednesday and Thursday so the children would not have to make up the snow days, according to their Facebook page. The closures continued into North Dakota, some businesses closed to allow their employees a chance to get safely home. Wednesday, the mail was running but nothing was coming from Billings, which is the location for Montana's USPS Processing and Distribution Center. The snowplows stopped and state highways closed all over the region because of visibility issues. Thursday came, the blizzard was gone and the snowplows were running again. 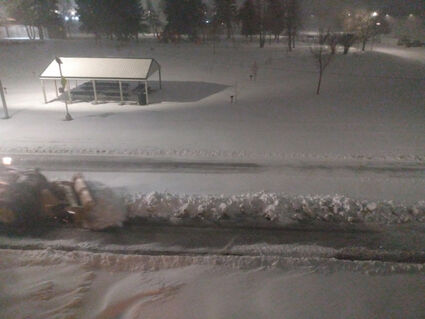 At first glance, all that snow would seem to be a blessing to farmers around the area and a possible step towards ending the drought. Snow and ice contribute to the water table in the MonDak area as it slowly melts. The snow was heavy and wet in Oregon, downing trees and knocking out the power but by the time it got past Billings much of the moisture was gone. Eastern Montana, generally, received between 6 and 18 inches of snow, with lesser amounts occurring to the northwest. According to the National Weather Service, Glasgow, the snow water equivalent ranged greatly across the region, between only a trace and one inch. The water equivalent precipitation was higher along the Montana/North Dakota border with lighter amounts to the northwest including north central Montana, according to the US National Weather Service Glasgow's Facebook page. North Dakota got a little better with up to four inches of water in the harder hit areas but, then some areas in North Dakota got up to 36 inches of snow.

Spring snowstorms are not as much of a blessing for ranchers. It waters the summer grazing but, spring is the time for the cattle to drop their calves. Calving season is always stressful because young livestock can die quickly because of the cold, especially when wet or with high winds. Drifting and accumulating snow also can make it difficult for even the adult animals to move in search of food or shelter. According to Jessi Roberts Wibaux, "It will probably be a while before people know how many calves they lost. The snow banks could be covering the calves well into May."