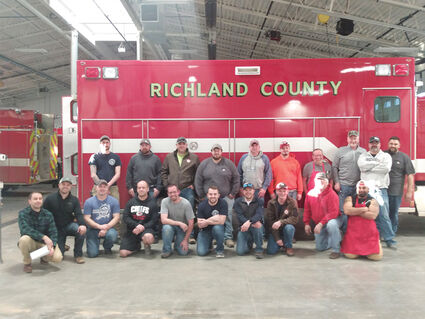 The Richland County Fire Department consists of four different stations spread throughout Richland County. Each of them is staffed with fearless and quick volunteers ready to drop what they are doing at a moment's notice to run to the aid and protection of man, beast, and property from fire.

Although it did not use to be this way, there are paid firefighters in the United States. However, as of 2022 according to the United States Fire Administration, 83.6% of all Montana fire departments are volunteer departments. According to franklinva.com, the first United States volunteer fire department was founded in Philadelphia, PA by Benjamin Franklin in 1736. Franklin's firehouse, the Union Fire Company, had only 30 men who courageously fought the fires, but unfortunately still only had leather buckets, strong bags, and baskets for carrying goods out of the building, to begin with. Wildlandfirefighter.com said in their article titled, "A History of Fire Pumps", that in the 1700's the first fire pumps were getting patented in Great Britain. They shot water 135 feet but still required a bucket brigade to supply water. Around 1850, horse drawn wagons began to be used. Fast-forward a few years and in 1914, Richland County comes into existence.

Sidney Fire Department began in 1888 but did not become incorporated until 1911. It started in Dawson County. Sidney's fire department has been protecting the area since 1913. Currently, 29 firefighters serve out of the Sidney fire hall. Adam Smith is the fire chief, Derek Carda and Justin Verhasselt are the deputy fire chiefs, and Kale Rasmussen serves as the Fire Marshal. There have been no recent advancements and there are a few who have served long enough to retire but have not requested it. The building is fairly new. They moved in there in 2017 from the former fire hall next to Sidney City Hall. They were planning on getting a new tanker truck last Thursday but not much more is expected to change. The Sidney Fire Department is called out to emergencies within and outside Sidney city limits.

Lambert Fire Department began in 1914 and never got incorporated. Fire Chief Ken Hill said no one is sure when they first got a fire department, but the fire hall they are in now was built in 1969 with an addition being built in 1991. They are thinking about adding to it again or building a new one. They also want a new piercing nozzle, new SCBAs, and a used structure truck. Seventeen brave firefighters serve in Lambert. Just like in Sidney, there have been no recent advancements, however, two or three of the firefighters have been talking about retirement.

Savage Fire Department, is not incorporated either. They only finally became a census-designated place in 2010, however, the citizens of Savage have had their fire station since 1952. According to Fire Chief LeeRoy Schmierer, they started with one truck and a few men but now have seven trucks, and equipment van, 27 firefighters, and 10 EMTs. They even have a spot in their fire hall for one of Richland County's ambulances. Savage Fire Department just received new SCBAs or self-contained breathing apparatuses and they are trying to get their compressor upgraded.

All three of these departments are capable of doing wildland and structure fire fighting along with vehicle extraction, auto extraction, and river rescue. Every department can be called out to aid in emergencies outside their normal areas of service if needed.