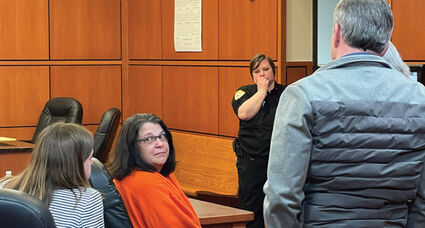 Lyndsee Colette Brewer speaks with family following her court appearance in District Court on April 27. Brewer was arrested on April 26 for the deliberate homicide of Christopher Arthur Wetzstein that took place in January.

Lyndsee Colette Brewer, 51, was arrested on Tuesday, April 26 in Miles City, MT in connection with the homicide of Christopher Arthur Wetzstein. On Jan. 28, 2022, officers with the Sidney Police Department were dispatched to an apartment building on the 900 block of 3rd St. NW after receiving a request for a welfare check for an individual who had failed to show up at work. The responding officers subsequently located a male subject, Christopher A. Wetzstein, 50, deceased in his bed with an apparent gunshot wound to his head.

An autopsy determined the manner of death to be a homicide with the cause of death due to the gunshot wound. Brewer, who was identified early in the investigation as a person of interest, was a long-time friend and business associate of Wetzstein's, who also matched the general description of a suspicious person seen on surveillance video from Wetzstein's apartment building. Investigators from the Sidney Police Department and the Montana Division of Criminal Investigation executed numerous search warrants during this investigation, including at Brewer's Forsyth, MT home. During the search of Brewer's home, a 9mm handgun was found that the state crime lab later determined fired the fatal bullet recovered at the scene of Wetzstein's death. Brewer is currently being held at the Richland County Detention Facility in Sidney, with bail set at $500,000.

During a bond hearing on April 27, Brewer's lawyer, Hailey Forcella, requested a cash bond of $15,000. They argued that Brewer and her family could not afford the amount and she would not get adequate medical treatment in the Richland County Jail. Brewer is suffering from several ailments as a result of a medical incident on Jan. 29 where she was found unresponsive.

On May 2, Brewer entered a plea of not guilty. The trial is scheduled for December.