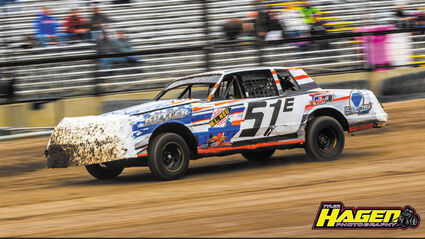 This season, 20-year-old Ethan Neu, Fairview, is excited to get back on the track with a new race car wrap and mindset. His first race of the season will be at the Williston Basin Speedway, May 7.

This is Neu's second year of racing, driving the No. 51E car in the IMCA Hobby Stock classification. He has competed on tracks all over North Dakota including Williston, Minot, Dickinson, Bottineau, and Underwood. Last year, Neu took home a win at a race in Minot during Labor Day weekend.

This year, Neu hopes to improve from the year before. "Last year I had a lot of complications, wrecking my car and getting it back up and running. Hopefully, this year I will have a lot better luck."

He also hopes to win a track championship in Williston and finish with high points at every race.

Neu loves the adrenal of racing and hopes to compete for many more seasons.

"I like the adrenal rush, going around the track super-fast wide open, and the sound of power around you."

His uncle, Mark Neu, helped him get into racing, bringing him to several races as a kid. After getting into the pits, Neu soon realized that he wanted to race too.

"When my uncle started to race again, I started to go to the races and got hooked. Once I got into the pits, I figured out that this is what I wanted to do and its super fun!"

Over the span of his racing career, Neu has learned a lot, especially with the maintenance and mechanical side of things. He does a lot when it comes to his race car, including tire prep, making sure his car has the right gas mixture, adjusting brakes, changing out springs for different types of tracks, changing out shocks, and many other things. "It is not as easy as it seems to race dirt track; there is a lot that goes into it."

Some advice he would give to others that are just starting their racing career is to slow down and not worry about being the fastest person on the track. He said, "It definitely takes time to learn how to race; don't get discouraged when tons of cars are passing you. It all takes time."