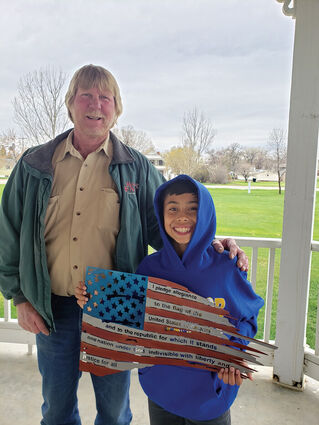 Pictured is Fairview Mayor Brian Bieber presenting Brycen Fox with a plaque of the flag imprinted with the Pledge of Allegiance. (Submitted photo)

During the blizzard April 13, 11 year old Brycen Fox was watching out of his window across the street from Sharbono Park in Fairview as the U.S. flag was ripped off its pole by the wind. Having been taught by his dad Tucker to respect the flag, he immediately headed out, struggling through waist high snowdrifts, to rescue it. His mom Kayla said Brycen returned with the flag held over his head, then he and his sister Skyler unfurled it, never letting it hit the floor. Brycen said it just seemed like the thing to do but the action so moved Fairview Mayor Brian Bieber that he ordered a special gift to say thank you.