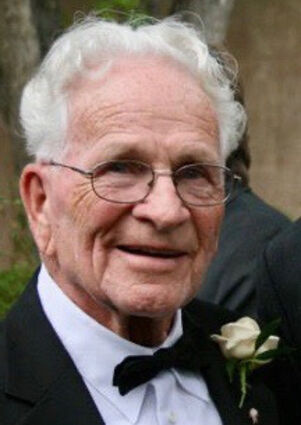 Robert Calvin Hall, ("Bob"), passed away peacefully at age 97 on February 24, 2022, in Albuquerque, NM. Bob was surrounded by the family members who could get to Albuquerque quickly enough when Bob took a downturn, and by the love of many family members in recent visits and through the magic of FaceTime and Zoom. Bob died knowing he was loved. Cremation is taking place in Albuquerque, and burial services will take place in Sidney at a later date.

Bob was born January 27, 1925, in Wibaux, Montana, to Guy Walter Hall and Lela Elvira Cruickshank Hall. Bob grew up with his brother, Guy Jr., in Wibaux in a railroad family, and in fact trains came roaring across a wooden platform and under the boys' bedroom throughout the day and night, shaking the whole house. Bob's dad was the Railroad Freight Agent in Wibaux, and his mom was the telegraph operator. As a Wibaux Longhorn, Bob played football, basketball, ran track, and was on the high school boxing team. Bob graduated in 1942, already in love with Mary Jablonski from the Jablonski family farm outside of Wibaux, towards Beach. They were married on New Year's Eve, 1942, and a month later when he turned 18, Bob was in the Army. Bob and Mary lived in base housing in Army training facilities before Bob was sent overseas and Mary went back to Wibaux. Bob was a Sergeant 1st Class in the China/Burma/India Theatre for the rest of WWII, then went home to Wibaux. Bob and Mary started their family while Bob went to work on the railroad. Later, with small girls at home, while in the Army Reserves Bob was recalled to active duty for the Korean Conflict in 1950.

In those early post-war years and while in the Reserves, Bob was a depot freight agent and telegraph operator at various small stations anywhere between Mandan, ND, and Livingston, MT. In 1953, he became the permanent Railroad Freight Agent at the Depot in Sidney, MT, a position he held until his railroad retirement in 1985. In Sidney, among other business ventures while still working full time at the Depot, Bob and Mary owned and operated the Sidney Music Mart, Interia, and built and operated the Village Square Mall. But mostly, Bob and Mary concentrated on family and community involvement, and were together through thick and thin until Mary died in 1996.

Bob lived in Sidney from 1953 until 2012. Bob was a Knight in the Knights of Columbus; a Jaycee (president in 1957-58); a long time Kiwanis member (president in 1967); a decades long member of the Sidney Country Club; and was involved in many other aspects of the Sidney community. Being blessed with a long life, Bob saw railroad stations progress from telegraph operations, to telephones, to computers. Bob saw the golf course develop from six sand greens to the beautiful 18 hole course it is today. Bob drove a Model A in high school in Wibaux, and a fancy Dodge pick-up well into his 90's for city driving in Albuquerque.

Bob was pre-deceased by his wife Mary Hall, (1996). Bob was also pre-deceased by his parents and sibling, grandson Paul Zins, and many other loved ones and in-laws through Mary's family. After Mary died, Bob spent a number of years in Sidney with Dee Elletson. In 2012, Bob moved to Albuquerque where son Brad and daughter Rebecca lived. Bob moved into a house next door to Brad and Carolyn, and connected their two back yards to make a compound. The compound became a busy place for many of Bob's children, grandchildren, and great grandchildren, for nine enjoyable years. Bob reluctantly stopped golfing and driving his truck in his mid-90's, but not before hitting a hole-in-one at age 91 while golfing with son-in-law Rich Booher one sunny New Mexico day. The hole-in-one was noted in the Albuquerque Journal, much to Bob's satisfaction. In 2021, Bob moved into Lifespire Assisted Living in Albuquerque, but from there still made regular outings to his children's homes, right up to the Sunday before he died at the facility.

Bob was a life-long Mansfield-style Democrat, and was very happy to see President Biden win the latest election. But Bob set aside politics to end each day, and focused on what is ultimately important: family. At the end, he was surrounded by the love of family and his religious beliefs, as he peacefully left this realm after a well-lived and long life.

Memorial Services will be held for Bob on Friday, July 22, 2022 at the Fulkerson-Stevenson Funeral Home in Sidney, MT at 11:00 am. Burial will follow at the Sidney Cemetery with Father Jim O'Neil Presiding.