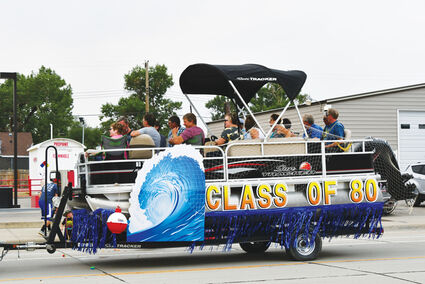 Fairview celebrated the 75th anniversary of the Fairview Festival and Old Timers Reunion on July 17, 2021. Pictured: The Class of 1980 float in the 2021 parade.

The Old Timers Festival Committee has a few changes coming to the Fairview Old Timer's Festival July 15-17, this year. There are just a few changes but it has the same good old-fashioned fun.

Since 1946, the people of Fairview have celebrated the Old Timers Festival to honor a person that has done a lot for the community. This year, Larry Bieber, a long-time resident and former volunteer firefighter, is this year's honoree. He will be in the grand parade, his picture is featured on the festival buttons, and t-shirts that can be ordered online on the Family and Friends of Fairview MT Facebook page.

However, that is not all of what the Fairview Old Timers Festival is about. There is so much more. Thursday, July 14, if the weather is permitting, there will be a family movie night in Sharbono Park after dark. The Bordertown 3-on-3 Basketball Tournament will begin Thursday, for adults and teens. Contact Trish, 406-489-0390 or Mel Hurley, 406-480-0184. The 3 0n 3 Basketball Tournament for grades 3-8 is all day Friday. Contact Trish or Mel.

This year's theme is "Keep on Truckin". The celebration continues with the registration of the old-timers Friday at 5 p.m. There will be hamburgers in the park from 5 p.m. until they are gone for $8 a plate. There will also be a junior high swim party at the pool from 8-10 p.m., $5 pass. The pool will be open until 8 p.m.

Saturday morning, a new event will be a free breakfast at Sharbono Park from 8 a.m. until gone. This will take the place of the free lunch in past years. Registration will also be available starting at 8-11 a.m. The Sun Rise Brass Band will begin playing in the gazebo at 10 a.m. Registration for the Kiddie Parade starts at 9:30 a.m. with line up at MonDak Clinic to begin at 10 a.m. The Classic Car Parade and Show line up will be from the north end of the park at 11 a.m. and line up on State Street at 11 a.m., for the Grand Parade which starts at noon. 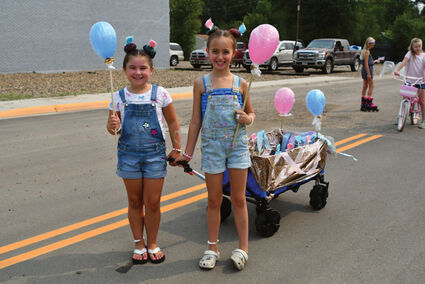 (L-R) Chloe Bushnell, 9, Cartwright, and Kaylee Johnson, 8, Fairview getting ready for the start of the Kiddie Parade pulling their 'Let's Party" wagon.

Ellery Ave. will be closed to through traffic on Saturday for the parades and other festivities. There will be free inflatables in the park from 1-5 p.m. Parents are required to supervise their children. The flag-raising by the American Legion at 1 p.m., which includes National Anthem, and program at the gazebo. Watch for Trista and Jerica, Hair Force, serving ice cream on Ellery in the afternoon. The Fairview FFA will be sponsoring a cornhole tournament at 3 p.m. as well and watch for the dunk tank. Explore America's Duck Race which starts at 4 p.m. at the canal bridge.

Saturday evening Josey and the Whalers will be playing on Ellery Ave. from 8-12 p.m.

There will also be food and other vendors in the park and along Ellery throughout the day.