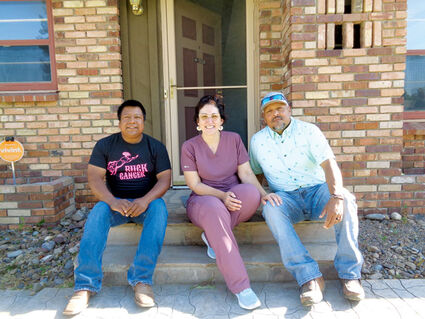 Pictured from left, Felix Aguilar purchased the property now known as Martha's Place at auction and felt he should to do something with it to benefit the elderly in the area. He teamed up with Martha Nugent, who had a dream to build a hospice called Martha's Place for seven years, and her husband, Richard Garcia, owner of Thy Neighbor. Together with their board, they are bringing Martha's Place into existence. (Photo by Jaymi Mozeak)

Wednesday, Aug. 9, just south of Sidney there was a ribbon cutting for a new non-profit hospice house tasked with providing the dying with a safe and supportive environment for them to move to the other side.

Martha's Place is the dream of Martha Nugent, an Adult-Gerontology Nurse Practitioner, for Allcheck Medical Clinic with a specialty in medical oncology. Seven years ago, she had a vision that she would build a hospice called Martha's Place. She and her husband, Richard Garcia, were living in Texas at the time so she had no inkling that it would have ever been in Sidney, MT. They moved to Sidney in 2020 for her work and things changed. They quickly settled into their new town, new church, and new friends. In 2021, a fellow partitioner from their church by the name of Felix Aguilar approached Martha and her husband. He had just purchased a large house at an auction, and he said he wanted to do something for the elderly with it and thought of them. She started crying and Richard had to step away because he already knew of her passion for the elderly and the dying. Felix had no prior knowledge of Martha's vision for the hospice house but there he was, there it was, and Martha's Place had begun.

The Martha's Place motto is going to be, "Our Hands, God's Plan". The home is approximately 7,000 sq. ft. with two stories and a full basement on six acres of land. The beautifully landscaped property has a barn, pond, and a few other interesting features. The house was custom built with a western theme. Other than the four bedrooms, it has an indoor pool, greenhouse, and walk-in cooler. Despite its incredible features, the building is not ready to have clients, yet. They have been quoted to need approximately $2 million of work done by their architect to make the facility a safe and comfortable place for those needing a hospice. Martha, Richard, and Felix also want to modify a few features to serve a new purpose. They want to create a quilting room. There is a fishing shed near the pond they are thinking of turning into a coffee shop for visitors to the hospice and there are plans to add a playground for children who are coming to visit loved ones. Martha would like to encourage people not to be afraid of death and would enjoy seeing children on the property. The house is outside city limits so acquiring chickens and stocking the pond are also being considered.

Martha's Place will be available to anyone who chooses not to die in a facility but may not have anyone to care for them at home regardless of social status or ability to pay. So far, the project has been paid for by fundraisers but, with the non-profit paperwork finally accepted by the IRS on June 27, grants are now available to them. Martha's Place will have a fundraiser in October. To keep up on further developments follow Martha's Place - future Hospice House on Facebook.