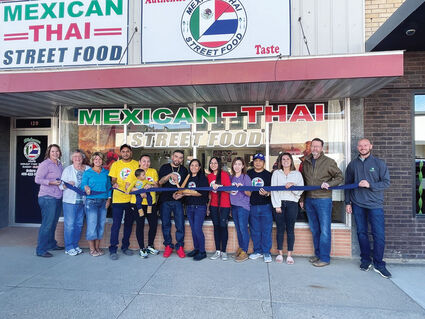 The trend towards oriental street food has arrived in Sidney with the opening of the Mexican-Thai Street Food Restaurant at 120 South Central Ave., across the street from the Meadowlark Brewery. The owners, Pedro Cerritos and his wife Kanda, have already opened and are amazingly popular, having experienced periods of a "full house" on several occasions.

Especially important to this new business is the support they have received from the Sidney Chamber of Commerce. The Chamber, represented by President Chip Gifford and his staff, made official the opening day with an enthusiastic ribbon-cutting ceremony that involved the entire staff of the restaurant as well as Chip's staff at the Chamber.

Pedro and Kanda and family are not new to Sidney and they are not new to the restaurant business as they have been operating the hugely popular Asian Gardens Restaurant for nearly 12 years from their location on Main Street across from the Ribbon and Rail. Surviving in the retail food business for 12 years in Sidney is testimony to their drive, hard work, and business acumen. All this during a period that has seen many businesses start up and go under due to the changing market with the ups and downs of the agriculture and oil industries. 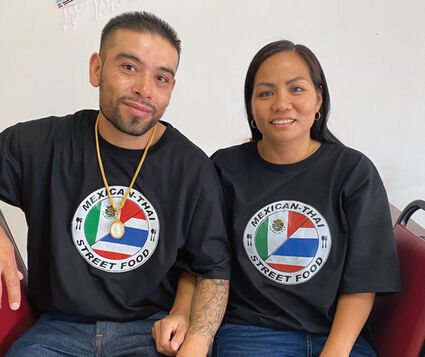 Pedro and Kanda's success has been partly due to their willingness to include their family in both businesses. Cat, their oldest daughter, is finishing up a degree in software engineering from Full Sail University. When not attending to scholarly endeavours, she is attending to waiting tables at the new restaurant.

So why Thai Street Food? It turns out their extended family is located throughout the country and they have considerable experience in oriental restaurants. In Las Vegas they own three restaurants with plans to expand even further. Kanda hails from Thailand, so it was a natural addition to add Thai Street Food to the menu.

The menu at their restaurant on Central is evenly divided between Mexican and Thai Street Food offerings, with Pork Jerky and Pork Meat Balls and the refreshing Cucumber drink among the most popular. Pedro and Kanda look forward to offering their popular fare; they are open weekdays and Saturday from 11a.m. to 9 p.m. and closed on Sundays.