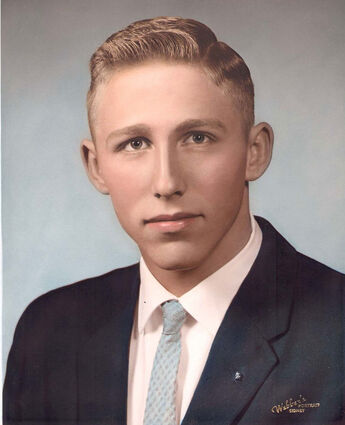 James "Kermit" Petersen, 81, of Sidney, Montana passed away Tuesday, October 4, 2022. Kermit's Graveside Service will be held on Monday, October 10, 2022, at the Sidney Cemetery. Pastor Tim Tharp will officiate. A Visitation will be held on Sunday, October 9, 2022, from 4:00 pm to 6:00 pm at the Fulkerson Stevenson Funeral Home in Sidney.

Kermit was born to Soren Anker and Anna Regina Petersen (Hansen) on September 15, 1941, in Sidney, Montana. He was the oldest to younger sister Kathryn Jensen of Lavina, Montana.

Kermit attended high school in Sidney, Montana where he loved playing on the high school's football, track and championship basketball teams. He graduated in 1960.

After high school, he attended Montana State University in Bozeman, Montana, where he studied accounting.

Kermit joined the Army after college and became a Military Police Officer while he was stationed in Wurtzberg, Germany. While in Germany, he met up again with his high school sweetheart Sandy Bosshard. Sandy was teaching at Buchel Airforce Base near Cochem, Germany on the Mosel River.

They were married on February 19, 1966 (TWICE). The legal marriage was at the Wurtzberg Courthouse and then married again two hours later at the Wurtzberg Army Chapel. A weekend marriage began because of military commitments and 180 miles of separation from his wife. He had so much fun and had wonderful memories traveling 18 countries in a new, blue, English TR4-A convertible sports car.

After completion of his service, Kermit started what he always wanted to do and became a rancher and a farmer, while Sandy taught at West Side School in Sidney, Montana. They had two sons: Kerm in 1976 and Kagney in 1977.

He watched Kerm and Kagney compete in bowling, wrestling, baseball, basketball, football and golf. During this time, he also participated in bowling, basketball and golf. Kermit enjoyed spending time at coffee with his friends. After his kids graduated from high school, Kermit visited his children's families while they lived in Billings, Denver and Washington D.C.

Later in life, Kermit loved spending time on the farm with Kagney, and seeing his grandchildren play basketball, soccer and football, and visiting with his sister.

However, in all of his travels, Sidney, Montana, was what he loved the best because of his family, farm, friends, and beloved classmates of 1960.

Kermit was grateful for each day. As mentioned above, he loved being outside on his farm and spending time with his family. Mention Kermit's name to anyone and their eyes smiled, and a kind word came next.

A special thanks to Bill and Dave Steinbeisser and Russel Dige for farming and helping Kermit whenever he asked and all our other neighbors who were always there when Kermit needed an extra hand.

Kermit is preceded in death by his parents, Soren and Ann Petersen.

Fulkerson-Stevenson Funeral Home of Sidney, Montana is assisting the family. Remembrances, condolences, and photos may be shared with the family at http://www.fulkersons.com