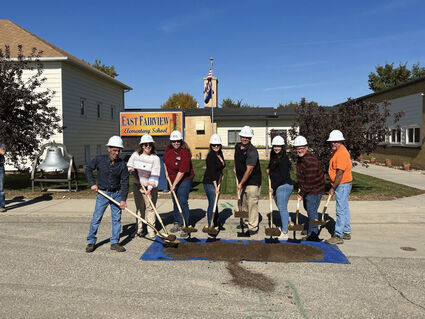 There was a ceremony at one of Fairview's public-school buildings to start a long overdue task. After four long decades, the East Fairview School will be undergoing some much-needed updates and renovations.

The ground breaking ceremony was Monday, Oct. 10, on the east side of the building. McKenzie County Commissioners and East Fairview School Board, Howdy Lawlar, Melissa Elletson, Doug Gullikson, Harvey Asbeck, Kathy Skarda, Clint Wold, Craig Hystad, and Derek Gackle as well as B&B Builders and EAPC reps, Sean Suisse, Melissa Elletson, Gentrie Lemerond, Krissy Trowbridge, Derek Gackle, Emily Kreil, Sean Sugden, and Tim Messer were all in attendance. The preconstruction meeting was on Oct. 14, and the work will be in three phases. 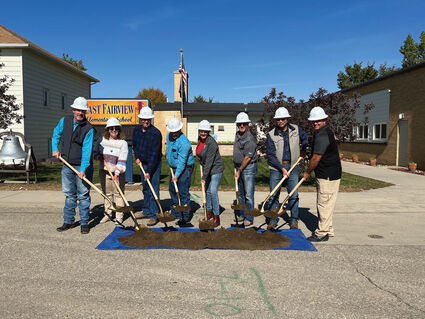 The week of Oct.17 the real work will start. Construction will begin on the new kitchens and four more classrooms for the junior high students. They are hoping the work will be finished in this phase by the start of 2023. At the start of summer 2023, the second phase will start. The two-story building that has housed East Fairview students since it was built in the 50s will be torn down. Afterward, the third phase will begin. The main entrance will be redone, some administrative offices, and a new multipurpose room will be added. They hope to be completely done with construction by Christmas 2023.

East Fairview School is a K-8 school with about 62 students this year. The need for renovations was not about enrollment. A facility assessment was done and it came back that the building was not up to code. Upon further investigation, it was found that it was more cost-efficient to just tear the two-story building down and build the individual classrooms than it was to upgrade it. The plan was taken to the commissioners and they agreed. School Administrator, Derek Gackle said, "We're a pretty small school. The taxpayers realized there has been no new construction on it since the '80s. It was time to update and the taxpayers agreed."