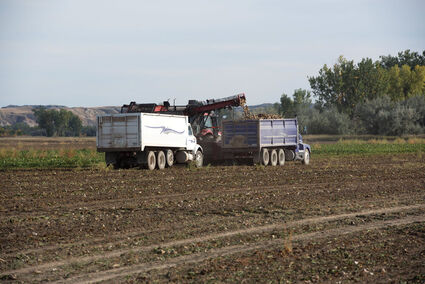 It all started this summer. Savage sugar beet producer Del Nollmeyer was experiencing chest discomfort while irrigating. After two weeks of tests, there was finally a diagnosis. “We were told we needed to go to Billings for an angiogram. It was there they found the blockage,” stated Del’s wife Kim. On August 19, he underwent a single bypass open heart surgery.

With beet harvest just around the corner Del and Kim were stuck. Del was in no shape to spend hours in the tractor topping and digging beets. "Our neighbor, Kjeld Jonsson had been in contact with Kim and was aware that I would need open heart surgery.” Del said. “Kjeld assured us that things would be taken care of on the farm.” While Del and Kim were still in Billings, Kjeld was in contact with the Savage farmers about harvesting their crop. "Once we were home, Kjeld shared the harvest plan with us.” Kim said. 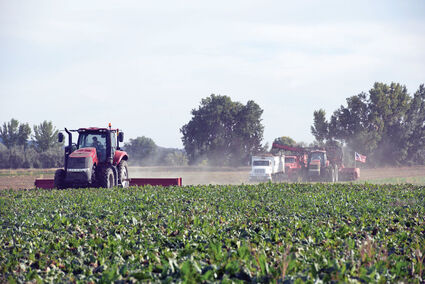 On September 29, a team of diggers, defoliators, and 24 trucks went to work on the Nollmeyer’s 191 acres. Kjeld Jonsson, Bryce and Dave Jorgensen, Jeff and Jon Jorgensen, and Mark and Tyler Tombre operated the diggers and defoliators, and local farmers provided the 24 trucks. Sidney Sugars worked with the growers to schedule processing Nollmeyer’s beets before the rest of harvest began. Due to the amount of help the Nollmeyers received, they were able to finish in two days. “We would like to thank our community for supporting us during this time,” said Kim. “Coming together and harvesting our crop. It really means a lot to us."