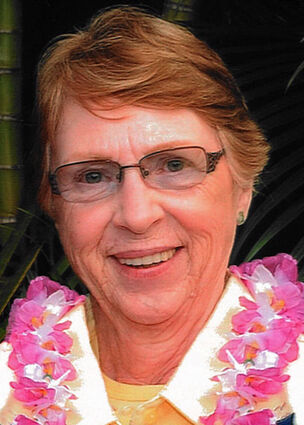 Memorial services for Antonette "Toni" Eberling, 86 of Sidney are at 10:00 A.M., Saturday, November 5, 2022, at Pella Lutheran Church in Sidney with Pastor Barb Haugerud officiating. Inurnment will be in the Sidney Cemetery, Sidney, MT under the care of the Fulkerson-Stevenson Funeral Home of Sidney. Remembrances, condolences, and pictures may be shared with the family at http://www.fulkersons.com.

Toni passed away on Monday, October 31, 2022, surrounded by her family at the Sidney Health Center Extended Care.

Antonette "Toni" Klette Eberling was born August 2, 1936 in Sidney, Montana. She was the daughter of Norwegian immigrant parents and early Montana homesteaders Anton and Olive (Jacobson) Klette. Her preschool years were spent on the family farm/ranch near Lambert. Toni attended schools in Sidney, graduating in 1954. She graduated from Concordia College in Moorhead, MN with a two year elementary degree in 1956. Her first two years of teaching were in Poplar, MT. It was there that she met her future husband, Ed Eberling. They were married June 16, 1957 at Pella Lutheran Church in Sidney. They moved to Havre, MT in 1958 where Toni attended Northern Montana College and completed her Bachelor of Science Degree in Elementary Education. She taught second grade in Havre for four months but had to resign when her first son, Michael, was expected. Shortly after Mike's birth, Ed was transferred to Helena where the family resided for a few months. Sidney then became their permanent home. Sons Mark and Marvin soon joined their brother Mike, and the family was complete.

After enjoying staying home with her sons through their preschool years and doing substitute teaching, Toni started teaching first grade in 1974 at West Side School. She continued teaching for 26 years, retiring in 2000. She loved her first graders and watching them learn, especially learning to read. She was twice chosen West Side SEA Teacher of the Year and was listed in the "Who's Who Among America's Teachers."

Toni loved her three sons and was so proud of their accomplishments. Mr. Ed was her best friend and loyal companion. She loved family gatherings and watching her grandchildren and great-grandchildren grow. She loved having coffee and dinners with best friends, shopping, traveling, beachcombing, puzzles, babies, and Indian summers. Toni loved the sea and lighthouses even though she was a prairie girl. She and Ed enjoyed many wonderful trips together and spent several winters in their second home in Lake Havasu City, AZ.

Toni was a member of Pella Lutheran Church, Sons of Norway, and Theta Chapter of Delta Kappa Gamma.

Toni joined her parents, Anton and Olive; sisters, Adeline and Mary; and brother, Melvin in eternal peace and rest.

Our deepest gratitude to Dr Pedersen, the Cancer Center Staff, Extended Care staff, and to Martha Nugent from Thy Neighbor for taking such good care of Mom.